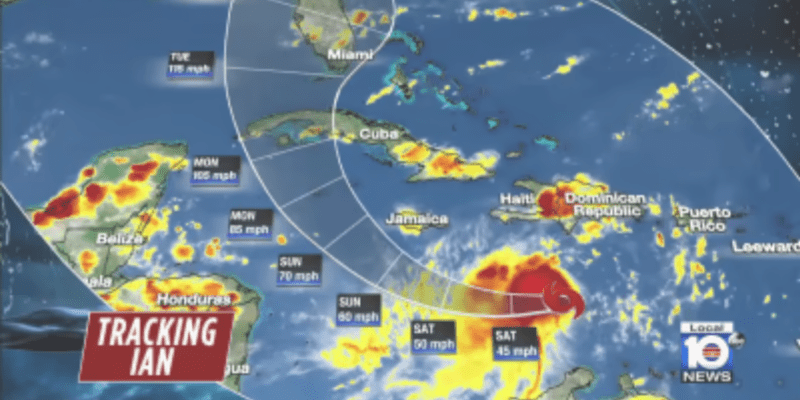 Tropical Depression Nine strengthened into Tropical Storm Ian in the Central Caribbean late on Friday evening, and current data about the storm suggests it will continue to intensify, becoming a hurricane before making landfall in Cuba and Florida.

Current projections show Ian’s wind speeds increasing to 105 miles per hour, rendering the storm a Category 2 hurricane by the time it impacts Cuba on Monday evening. The storm is then expected to intensify again as it gathers strength over the open ocean north of Cuba, becoming a Category 3 hurricane with sustained wind speeds of 115 miles per hour before veering in a north-northeast direction toward Florida.

The storm is projected to make landfall in Florida as a Category 3 hurricane, and weaken to a Category 2 storm as it approaches Central Florida and the Walt Disney World Resort area.
RELATED: How Many Hurricanes have Caused the Closure of Disney World?
On Friday, Florida Governor Ron DeSantis declared a State of Emergency in 24 counties, which include the following:

As of 11:00 p.m. on Friday, Tropical Storm Ian was located 385 miles southeast of Kingston, Jamaica, and nearly 700 miles east-southeast of Grand Cayman. The storm was moving in a west-northwesterly direction at approximately 12 miles per hour with maximum sustained wind speeds of 40 miles per hour.

Currently, the National Hurricane Center says hurricane conditions are possible in the Cayman Islands by Monday morning. The Florida Keys and South Florida are expected to see heavy rainfall beginning as early as Monday, and both flash flooding and urban flooding are possible because of the rainfall.

RELATED: Here’s What You Need to Know for Your Theme Park Vacation During Hurricane Season

“This storm is expected to strengthen to a major Category 3 hurricane with winds of 115 mph by Wednesday morning,” explained meteorologist Kellianne Klass. “Southwest Florida to Tampa Bay are all in play for landfall. Still thinking the impacts for Central Florida will be around Tuesday through Thursday. GFS and European models are still not in agreement with the speed of the storm. GFS has the storm lingering off of the coast through Friday. The European model kicks the storm out by Thursday. This is still a fluid situation as we still need to fine-tune the exact landfall and timing of the storm.”

As this is a developing and constantly-changing story, we will continue to share updates are they are available.

Comments Off on Tropical Storm Ian Forms, is Expected to Make Landfall in Florida as a Category 3 Hurricane