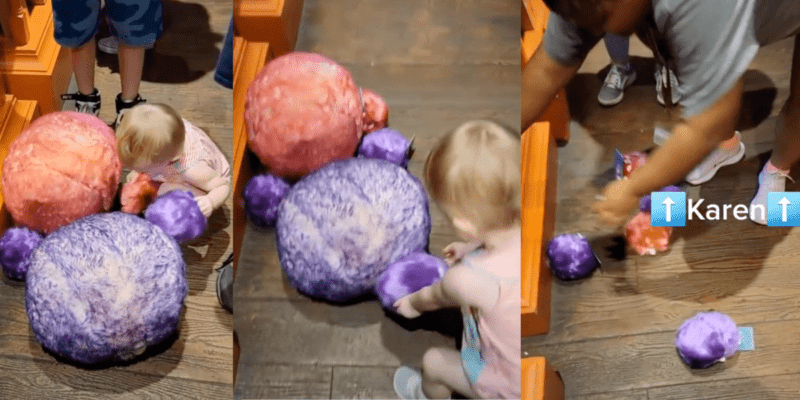 The Wizarding World of Harry Potter – at Universal Orlando Resort and Universal Studios Hollywood – offers magical memories for the entire family. Drink Butterbeer, travel through Gringotts Bank, and bring home unique souvenirs based on the series by J.K. Rowling.

In Diagon Alley, Guests can visit Weasleys Wizard Wheezes to find silly and whimsical trinkets for all ages. TikTok user @efenawesumnynja, a Universal Orlando Resort Annual Passholder, visited the shop at Universal Studios Florida last week with her family. She shared a video of her toddler playing with Pygmy Puffs, a popular stuffed toy available throughout Diagon Alley and Hogsmeade at Islands of Adventure:

In the video, her toddler collects various Pygmy Puffs and piles them on the small shop’s floor. At the end of the TikTok, another Annual Passholder starts to pick up the Pygmy Puffs and put them away. “She was having a blast until some random Karen picked up all the toys 🙄,” the mom wrote.

The video quickly gained traction, not getting the response the Guest hoped for. Many pointed out that Weasleys Wizard Wheezes is already a tiny shop that’s hard to get around when it’s crowded. “The store is NOT a playground-an employee,” @jebbygibson wrote.

Others pointed out that unless the Guest was planning on buying all of the toys her daughter touched, she was getting them dirty and ruining them for others. “Buy them and she can play w them at home!!!” @gorillagrip420 said.

Some said it was nice of the other Guest to pick the toys up. “[Were] u going to pick them up? sadly after kids r done “playing” in stores the retail worker always has to fix their mess,” @_adynisgreat wrote.

Related: Universal Guests Stuck Upside Down on Harry Potter and the Forbidden Journey For Over 20 Minutes

After receiving nearly 12,000 comments, the mother posted a video apology that wasn’t well-received:

For what it’s worth #fyp #foryoupage #fypシ #sorry #efenawesum #efenawesummom

“I felt she was being aggressive when she stomped up towards my child and snatched up toys that we were planning on purchasing,” she explained.

However, in another video, the Guest showed that she only purchased three of the many toys her daughter was playing with. (The Pygmy Puffs range from $20-35 each.) She claimed that “some crazy lady” let her child get the other plushes dirty, so she didn’t buy anymore, which many commenters said was hypocritical.

“I’m sorry that people were offended by putting things on the floor. I can see why people were bothered by that, but I was planning on buying things, and I did buy things, and one of those things was on the floor when I got there, so I didn’t let her put everything on the floor,” she claimed. “I mean, the giant purple puff was already there.”

Hundreds of comments accused the Guest of gaslighting throughout her apology and being passive-aggressive. “As soon as I heard “I guess I gotta make a few apologies” I knew it was gonna be a whole lot of gaslighting,” @rosie_and_leigh_books said.

“It’s ok to say you were in the wrong [you know],” @sticky_shrimp wrote.

Do you think the Guest was in the right?