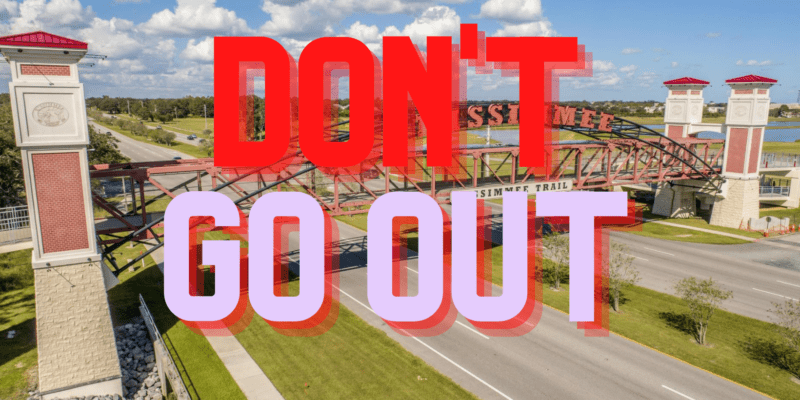 Hurricane Ian made landfall in Florida on Wednesday with winds just shy of those found in Category 5 storms. The slowly-moving storm brought with it torrential rainfall, damaging winds, and flash flooding, and nearly 48 hours later, not all the floodwaters have receded, leaving much of the state of Florida in a state of disrepair.

Central Florida was among the areas in the Sunshine State hardest hit by the storm, as Ian caused damage to theme park structures, as well as widespread catastrophic flooding. On Thursday, Orlando International Airport was forced to remain closed as all roads leading to the airport were impassible due to floodwaters.

Kissimmee, Florida, home to many of the Cast Members who work at the Walt Disney World Resort, has also been ravaged by floodwaters, and as such, the mayor of Kissimmee, Olga Martinez, has enacted a mandatory curfew in the city.

Extensive flooding in our area remains a serious situation for Kissimmee residents. Shelter in place as first responders continue rescue operations. If you have an emergency, call 9-1-1. pic.twitter.com/RGn0HWzCj0

According to Florida Politics, Osceola County was not placed under a curfew, but the city of Kissimmee enacted a mandatory curfew for Thursday and Friday. Residents are not to be outside from 9:00 p.m. to 6:00 a.m.

Kissimmee is just one area under a curfew or a “stay-at-home” directive following Hurricane Ian’s pass-through. Since Ian departed, the following cities and/or counties have been among those in which such directives have been enacted at one time or another:

Such directives are largely put in place during a time of natural disaster or state of emergency in an effort to keep residents safe, to reduce the threat of crime, and to keep roadways in affected areas clear so that first responders and local law enforcement can access those roadways in order to executive rescue missions and offer assistance to residents in need of help.