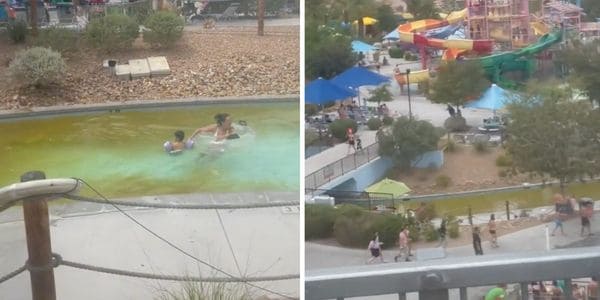 A bizarre issue occurred at a water park in Las Vegas, forcing all Guests to evacuate.

At Disney World, Guests have the choice between Blizzard Beach and Typhoon Lagoon, which are both incredibly fun and impressively themed.

A day at the water park can be a great way to cool off and relax, especially if you’re somewhere like Florida, which can face some seriously-high temperatures. However, a day at a water park can easily be ruined, and as shown in a TikTok, this is exactly what happened.

As you can see, Guests visiting the Cowabunga Bay Water Park in Las Vegas were in for a rough experience the other day when people started to notice a brown color permeating the lazy river.

While the brown color in the pool is certainly concerning, several users in the comment section responded with their theories as to what it actually is. Jonathan said:

“Former maintenance guy at cowabunga bay… pretty much my best guess is that due to a pipe fail all the filter media(sand) got sucked directly in pool.”

In the comments, the original poster clarified the situation, saying:

“No, no one was willingly swimming in it. This happened super fast. Ppl were rushing to get out.”

Another user, Sarai Rox, claimed to work at the water park, saying:

“I work there the filters got switched and that’s all just dust, dirt, and sand from the storms in Vegas and the filter system”

We are unsure what exactly caused this issue, but hopefully, it was resolved quickly as this is the last thing you want to see at a water park. Regardless, it appears that Guests had to evacuate and the water park most likely closed down, at least for the rest of the day .

Have you experienced something like this before at a water park?

Comments Off on Guests Flee Water Park Due to Mystery Contamination