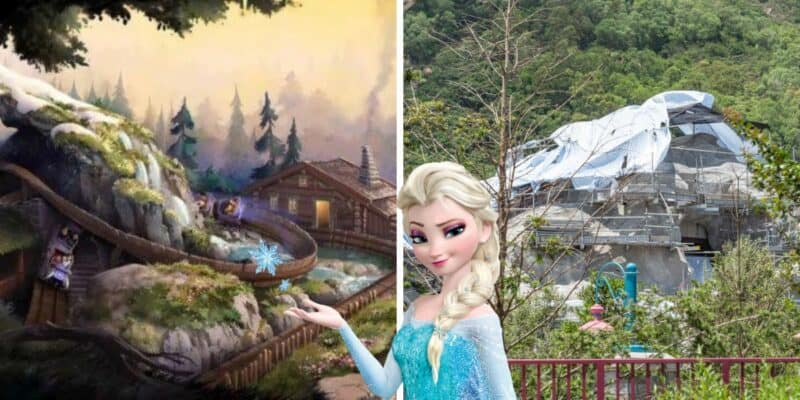 The highly-anticipated Frozen land was first announced in 2016 and will be home to a stunning atmosphere, unique attractions, and may even allow Guests to bump into some favorite characters from the record-breaking film.

During the announcement of the Frozen-themed land (which will be called Arendelle: World of Frozen) at the D23 Expo, Bob Chapek spoke on his excitement of the land, saying: “Soon Guests will be able to visit the kingdom of Arendelle with all of its sights, sounds, cuisines, and traditions.”

Inside the Magic just reported yesterday that Guests can now see Arendelle’s North Mountain from Main Street, U.S.A., which you can read more about here. But, today, we are happy to report construction is progressing on Wandering Oaken’s Sliding Sleighs — one of the attractions inside Arendelle: World of Frozen.

Concrete layer has almost covered the entire structure of “Wandering Oaken’s Sliding Sleighs” at #ArendelleWorldOfFrozen, one of the caverns can also be seen.

Concrete layer has almost covered the entire structure of “Wandering Oaken’s Sliding Sleighs” at #ArendelleWorldOfFrozen, one of the caverns can also be seen.#hongkongdisneyland #hkdl #disneyparks #disney #香港ディズニーランド #ディズニー #Frozen pic.twitter.com/ltZrOESgg2

At this time, we do not have an opening date for the land as it was originally scheduled to open in 2021, but was delayed since the opening was postponed indefinitely following the closure of the Park due to the COVID-19 pandemic.

Inside the Magic will continue to update you as we get information regarding Arendelle: World of Frozen.

Do you hope to see Arendelle: World of Frozen open soon? Let us know in the comments below.