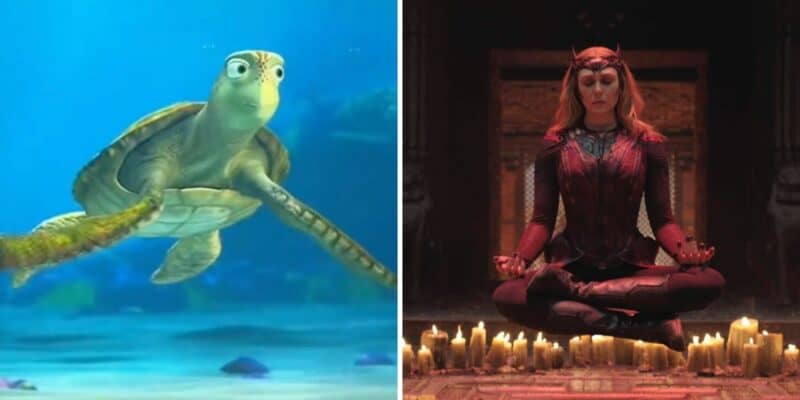 At Disney’s Turtle Talk with Crush, Guests can “shoot the breeze under the seas” in a 15-minute experience that sets them face to flippers with their favorite Finding Nemo (2003) sea turtle. A microphone makes its way around a room of park goers seated around a window to the ocean, giving fans a chance to interview Crush himself through the use of special technology.

The unique attraction is entirely improvised and totally unpredictable, as the questions are not revealed to Crush prior to being asked by Guests. Historically, this has led to some rather interesting exchanges.

In a TikT0k video posted by former Crush Cast Member and voice actor Tommy Arciniega, they describe an incident in which they were asked about their marital status by a young Guest. Barely keeping it together, Tommy mustered their best Crush response before asking if the young Guest had a special person in their life as well.

“This little girl who couldn’t be older than 6 or 7 replies, ‘yeah, he’s my sexy boy.’ I lost it,” Tommy recalled in the clip.

Another young Guest saw the Q & A as an opportunity to ask Crush where the bathroom was, to which he responded that he couldn’t tell her where the human bathroom was but his personal bathroom was all around him. The crowd erupted with laughter.

But it was in the below Turtle Talk experience that Crush was truly tested, as the Disney and Marvel fan bases collided with one, hotly debated question: Is the Scarlet Witch a villain, or a hero?

It’s a hot topic for Marvel fans who have followed Elizabeth Olsen’s Wanda Maximoff, also known as the Scarlet Witch, for 8 tumultuous years on screen. In that time, her character arc included being used as a weapon against Earth’s mightiest heroes in Avengers: Age of Ultron (2015), defending the universe alongside the Avengers in subsequent films, and finally, nearly destroying the universe opposite Doctor Strange in Doctor Strange in the Multiverse of Madness (2022).

And that’s not even mentioning when she used her powers to mind-control hundreds of people and create an alternate reality in order to distract herself from her overwhelming grief in the Disney+ series WandaVision (2021).

Marvel has gone on record to say that the plan to make Wanda Maximoff a villain had always been in motion, much to Elizabeth Olsen’s surprise.

So what does Crush think of the widely debated subject? Is Scarlet Witch the hero, or is she the villain? His response to Guest April’s question was recorded and shared in the TikTok video below.

“I thought we were in the bottom of the ocean because this just got deep,” Crush quipped in his initial reply. “Quick follow-up question though, who is the Scarlet Witch?

April’s answer earned mixed reactions from the crowd as she told Crush that the Scarlet Witch is “the strongest Avenger,” another argument that Marvel fans often find themselves in. Some gasped and some affirmed, but Crush remained confused.

He asked if the Scarlet Witch was “one of those superhero dudes” before sharing his expertise on the subject using a sea of hilarious puns.

“I don’t know about a Scarlet Witch, dude. I only know, like, Spider Crab Man, Sockeye and Black Minnow, but my favorite is totally the Iron Manatee dude. Don’t tell him I told you so, but, um, his secret identity…

He instructed April to circle back with him should she get to the bottom of the Scarlet Witch debate, as the room of apparent Marvel fans laughed in unison.

Guests can bring their own questions to Crush on their next trip to the Disney Parks. As for the Scarlet Witch, fans might be able to catch her at the Avengers Campus, located at both Disney California Adventure Park and Disneyland Paris.

Located at EPCOT in Walt Disney World, and in Hollywood Land at Disney California Adventure Park, the popular attraction is officially described by Disney as follows:

“Take a seat at Turtle Talk theater and watch as the turtle from Disney and Pixar’s Finding Nemo swims up close. Through the amazing technology of the hydrophone, he can communicate directly with land-based dudes and dudettes about almost anything that’s on their minds.

He may also introduce you to his pals Marlin, Nemo and Squirt—plus new friends from Disney and Pixar’s Finding Dory.”

So which is it? Is Scarlet Witch a villain, or a hero? Cast your vote in the comments below.