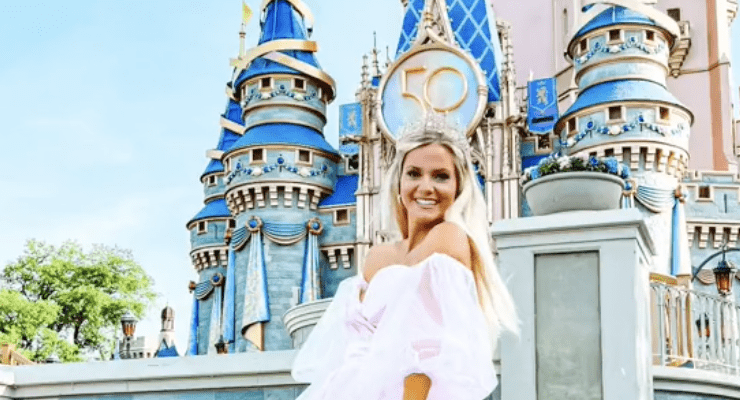 In Alice Payne’s third pregnancy, she began to experience a prenatal depression she had become far too familiar with in pregnancies prior. With few depression treatment options deemed safe for pregnant people, Payne knew she had to take her mental health into her own hands.

Related: A New Friend Is Coming to Disney Parks Soon!

She used trips to Walt Disney World as a coping mechanism, but reality started to set in that these vacations were about to become increasingly unrealistic for them after the birth of their third child.

And so, just two weeks after undergoing a cesarian section and with three kids in tow, she and her husband made the best move they could think of to help treat Payne’s depression.

They moved to Disney World.

She shared the following introduction video for those who wanted to know more about her story:

2 years and over half a million TikTok followers later, Payne is living her best life as a Disney content creator.

This begs the question, can Disney World clinically improve depression? Are there positive health benefits associated with a trip to the parks? Some scientists have wondered the same.

Thanks to a study published in the JAMA network, it’s been proven that “watching Disney movies during chemotherapy may be associated with improvements in quality of life in patients with gynecologic cancer.”

A Michigan State University urologist prescribes Disney trips to his patients who need to pass kidney stones, specifically instructing them to ride the popular Big Thunder Mountain Railroad attraction. The coaster offers a jostling “race through a haunted gold mine aboard a speeding train,” per the ride’s official description.

“Basically, I had patients telling me that after riding a particular roller coaster at Walt Disney World, they were able to pass their kidney stone,” Wartinger told Science Daily. “I even had one patient say he passed three different stones after riding multiple times.”

Wartinger confirmed his patient’s findings through a study that saw up to a 100% success rate.

Then there was psychiatrist Dr. Sanders, who Inside The Magic previously reported would prescribe trips to Disney to patients he felt could benefit from the positivity the parks provide. Dr. Sanders shared the following about his theory back in 2020.

“My patients have the choice to take trips with their families to help promote positive changes in their behavior and develop lifetime memories in the meantime. I usually suggest my patients purchase an annual pass to make sure that they are able to continue on their path to managing their emotions.”

Not to mention the fact that Disney park-goers inarguably experience an increase in serotonin boosts and likely engage in more exercise than usual as they traverse miles through the property.

While there might be an absence of concrete scientific studies that specifically prove the health benefits of a trip to the Disney parks, it appears that Guests like Alice Payne might be onto something by incorporating Disney into their treatment plans.

Do you think Disney trips are good for your health? Let us know in the comments!