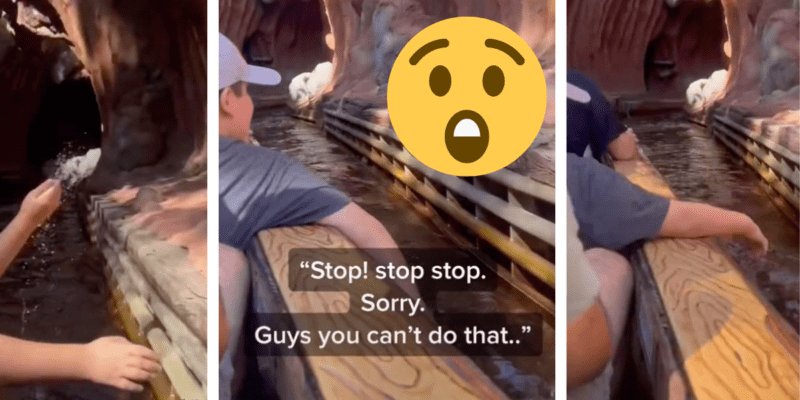 Splash Mountain and other Disney attractions have safety rules in place so that no one gets injured while enjoying their favorite ride. Unfortunately, a growing trend encourages Guests to stick their hands and feet into the Splash Mountain ride water.

Mal (@mally_mouse) was riding Splash Mountain in Critter Country at Disneyland Park and filming for her Twitch and TikTok, which has over 700,000 followers, when another Guest reached their hand into the water to splash Guests behind them:

“Don’t ever do what this kid did,” Mal warns. She shares the video where the child’s father immediately says, “Stop, stop, stop. Sorry. Guys, you can’t do that.”

Mal thanks the dad for apologizing and stopping the child but warns other Guests never to stick their hands outside the ride vehicle or break the rules.

“There are security cameras on all the rides, and Cast Members will not hesitate to call you out on it over the intercom or when you get off the ride in person,” Mal explains. “You are directly breaking their rules and safety protocol by sticking your little fingers in the water where it could be pinched and broken in between the log and the wall.”

“It’s bad enough that I have to brace for it and cover everything right as we’re going down the hill, but for somebody to catch me off guard and just throw it at my face and my camera is like… It’s not even that they were breaking safety protocol because, like, that’s your consequences to deal with, not mine. But it’s the fact that they blindly did that with strangers sitting behind them. Like, think it through next time, please.”

In the comments, @brittjohnson2022 agreed. She said that on her last Disneyland Resort vacation, her ex tried to splash her and “smashed” his hand between the log and the guard rail.

Splash Mountain will reopen as Tiana’s Bayou Adventure in 2024 at Disneyland Park and Magic Kingdom. No closing date has been publicly announced for either ride. The Song of the South (1946) ride will remain the same at Tokyo Disneyland. From Disney: