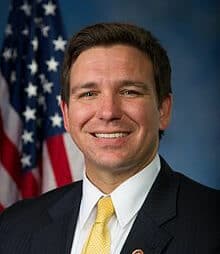 Credit: State of Florida Office of the Governor

Florida Governor Ron DeSantis is making headlines once again, this time for going after the drag community.

The Daily Show (1996) correspondent Dulcé Sloan and Kerri Colby from RuPaul’s Drag Race (2009) explained the conflict in a video uploaded to YouTube yesterday.

“Recently conservatives have acted like drag is some brand new thing that liberals dreamed up to turn your kids into glitter demons,” Sloan said at the start of the clip. “Ron DeSantis threw his hat in the drag-hating game when he said he wanted to revoke the liquor license of a restaurant that allowed kids into drag brunch.”

Sloan is referring to Governor DeSantis’ recently filed complaint against R House Wynwood, a Miami restaurant that hosts weekend drag shows. According to the Miami Herald, the complaint argues that “the nature of the performances described above, particularly when conducted in the presence of young children, corrupts the public morals and outrages the sense of public decency.”

In light of this, and in an effort to allow Governor DeSantis the opportunity to get “up close and personal with the artform,” Sloan and Colby gave him their very own drag makeover, with commentary.

“Kerri and I are going to take a closer look at some of these Republicans who got beef with drag, and help them get in touch with their inner drag queen,” Sloan explained before likening Governor DeSantis to that of “Pinocchio if he’d grown up and joined QAnon.”

Colby first discussed the governor’s hair, accusing him of being a 43-year-old man who still gets his hair done at Kids Cuts. Sloan agreed that they should first fit him for a wig with a “blunt cut, long enough to cover his face.”

“Look at this man’s face, he’s got Jim Crows feet,” Sloan quipped in a play on words.

I’m surprised he has so much to say for a man with no lips at all,” Colby added. “Look at this man, he runs his mouth so much that his lips have left the scene.”

Sloan and Colby suggested a full red gloss would solve the governor’s lip problem, and added a more charismatic brow while they were at it. After finishing Governor Desantis’ makeover, they moved on to their next conservative “client.”

The full video can be viewed below, or by clicking here.

Earlier this year, the Florida Governor made national headlines as he introduced “The Parental Rights in Education Act,” better known as the “Don’t Say Gay” bill, a proposal that if passed, would essentially “prohibit any instruction about sexuality or gender between kindergarten and third grade” according to NPR.

President Biden slammed the legislation, calling it “hateful” in an early February Tweet.

I want every member of the LGBTQI+ community — especially the kids who will be impacted by this hateful bill — to know that you are loved and accepted just as you are. I have your back, and my Administration will continue to fight for the protections and safety you deserve.

I want every member of the LGBTQI+ community — especially the kids who will be impacted by this hateful bill — to know that you are loved and accepted just as you are. I have your back, and my Administration will continue to fight for the protections and safety you deserve. https://t.co/OcAIMeVpHL

Still, the Florida House of Representatives passed the controversial bill before February’s end.

Not long after, The Walt Disney Company’s finances slid into the spotlight as fans and Cast Members learned through public records that they had donated to all of the bill’s sponsoring politicians, sparking outrage, protests, demands, and calls for action.

The Walt Disney Company CEO Bob Chapek eventually responded by calling Governor DeSantis to inform him of Disney’s unsupportive stance on the legislation, which was ultimately signed into law at the end of March. Disney vowed to pull their political donations, which resulted in a substantial hit to Florida’s campaign fund.

Again, Governor DeSantis found himself at the center of controversy as this new legislation, which was signed into law in April, transfers The Reedy Creek Improvement District’s costs and potentially any accrued debt over to the taxpayers a burden they haven’t borne since the 1960s.

Several lawsuits have since been filed by those claiming that with this new seemingly retaliatory legislation, the governor is actually in direct violation of the Taxpayer’s Bill of Rights.

As if making enemies with many Central Floridians wasn’t enough, he’s now tacked on a battle with the drag community.

What do you think about Governor DeSantis’ makeover on The Daily Show? Let us know in the comments below.