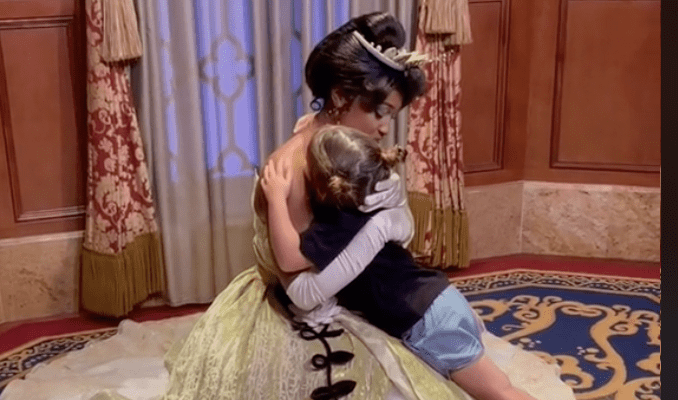 Guests have the option to interact with their favorite characters through various meet and greets across the Disney parks. Some use the time to snap a photo, some use it to engage in themed dialogue, and some won’t forget to leave without an autograph. The recent return of character hugs has made the exchanges all the more treasured.

This was especially true for one young fan, whose face time with Princess Tiana was good for one thing above all else — a quick nap. They say there’s no tired like Disney tired, and no one understands that as much as Tiana after a fan fell asleep in the princess’ arms mid-hug.

The video, which you can view above or by clicking here, shows a knelt Tiana surrounded by her traditional, green gown, positioned at eye level with the young child. Tiana sways and pats the child’s back, in no hurry to move on to the next Guest.

The clip’s caption reads that “Tiana hugged her so long she went to sleep in her arms.”

Commenters called the moment one of the sweetest they’d ever seen, while one insider shared a special anecdote about Disney character training.

“The most beautiful thing Cast Members learn is to be the last one to let go in a hug,” Christina Wheeler wrote. “I remembered this when I hugged Mickey a couple of years ago.”

User Angel Roche agreed with Wheeler, sharing that Cast Members are taught that you “never know how bad that child needs that hug.”

User Kristin commented that it’s moments like these that remind her why she spends the money to visit the Disney Parks.

“Cast members don’t get paid enough for their kind hearts,” @mrsLight0505 wrote. “I know there are rules they have to follow but those people are extraordinary.”

Others noted that it was likely an equally special moment for the princess, to have such tangible evidence of the impact they have on children’s lives.

What character are you most excited to see when you visit the Disney Parks? Tell us in the comments!