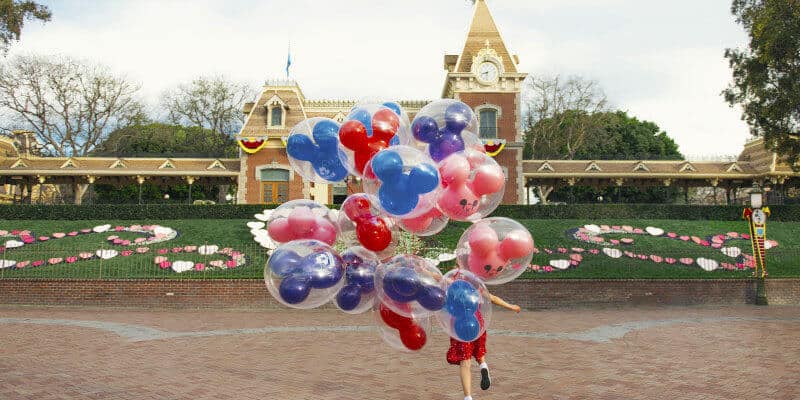 Balloon sellers are a staple on Main Street, U.S.A., at Disneyland Park and Magic Kingdom at Walt Disney World Resort. It wouldn’t be the Disney Parks experience without bunches of balloons floating in the sky in front of Sleeping Beauty or Cinderella Castle!

Selection fluctuates, with new balloons for each holiday or relevant franchise like Star Wars, but one staple has always remained: the classic Mickey Mouse balloon! The Mickey balloon is so iconic that it’s been turned into popcorn buckets, Loungefly backpacks, and Mickey Mouse ear headbands.

While Mickey balloons have been high in the sky at Walt Disney World Resort for the 50th Anniversary Celebration, the classic balloon has been notably missing from Disneyland Resort. Fans have longed for the Disney Park balloons’ return since Disneyland Park, Disney California Adventure, and Downtown Disney reopened during the ongoing COVID-19 pandemic.

A desperate Disney Parks fan took to Reddit this week in search of a return date for the beloved Mickey Mouse balloons. u/AdditionalCupcake wrote:

WHEN ARE MICKEY EAR BALLOONS RETURNING?😡
That’s it. That’s the post. Anyone have any insight into this?? Anyone else as irritated by this as I am?

u/not_so_littlemermaid said that not only have they not seen Mickey Mouse balloons but that the Disney Parks are selling out-of-season options:

I have no answer for you but I was at Disneyland memorial day weekend and they were selling EASTER balloons! I thought that was so odd

Another Disneyland Resort fan, u/snarkprovider, linked an article from Quartz about the ongoing global helium shortage and said:

I trust the helium is going where it needs to go right now.

Though Quartz published the helium supply shortage article in May, it was last updated last month. According to their reporting, helium is necessary not only for balloons but cooling MRI machines and scientific equipment, semiconductor manufacturing, and the weather balloons meteorologists use to make forecasts.

Comparatively, Mickey Mouse balloons take much less helium than medical and scientific experiments. Though the Disney Parks haven’t released a statement about the helium shortage’s impact on balloon availability, retailers like Dollar Tree have warned consumers that their favorite party balloons might not be abundantly available.

The helium shortage is unlikely to impact Mickey Mouse balloons, given that other balloons are readily available at Disneyland Park and Disney California Adventure. More likely, different supply chain shortages affect Disney’s ability to produce Mickey balloons, and those that are made are sent to Walt Disney World Resort because of the 50th Anniversary Celebration.

Have you seen Mickey Mouse balloons at Disneyland Resort?