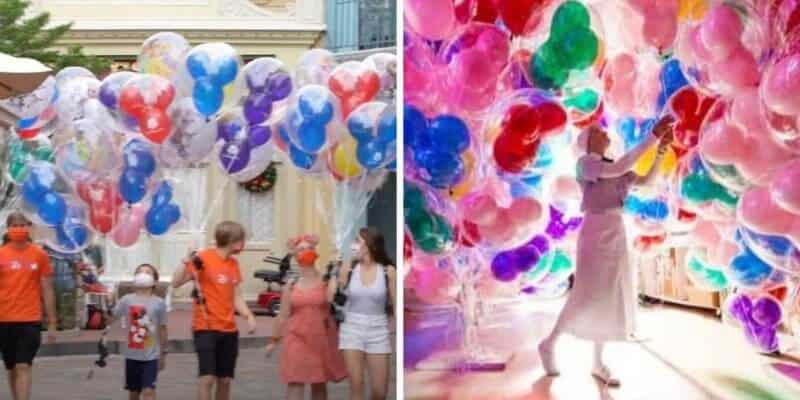 Disney YouTubers are always finding new and fun ways to show off the theme parks, and some even find ways to ensure that the Guests around them are having a magical day, as well.

When walking down Main Street, U.S.A., there are plenty of things that grab Guests’ attention when it comes to looking for items to purchase. From the delicious smells of the Main Street Confectionery to the merchandise in each storefront window, it’s hard not to spend money.

One of the most accessible and “in your face” purchases are, of course, Disney balloons. There is nothing more iconic and picturesque than taking a photo in front of Cinderella Castle and holding a classic Disney balloon. The only negative side is that the balloon is rather costly at $14.00 a pop!

However, that cost did not stop Adam, Eric, and Cara, also known as The Insiders. These Disney fans and YouTubers purchased 52 balloons for $728.00, only to walk around Magic Kingdom and hand them out to Guests for free! To watch the full video, you can check it out below:

It was easy to see how quickly The Insiders were able to give so many Guests a magical moment! We caught up with the YouTubers who discussed their experience making the video.

“Just before the pandemic, we were doing a series of short surprises in the park, sharing a fastpass or buying a popcorn bucket for random guests. Over the pandemic, we missed the magic that the Disney Parks brought to us. So on our channel, we started doing Monday livestreams called “Magic Mondays” and the entire purpose of those streams was to encourage people to be kind and make magic withing their communities.”

The Insiders wanted to see more magic being created and wanted a space where they could share stories, and others could as well. This led them to create their Facebook group called Magic Makers.

During the lockdown, The Insiders’ Magic Mondays became big! The YouTubers shared that people around the world were teaming up to help create magic by donating their time, money, and resources. The Insiders then passed along a story from their childhood, sharing “how cool it was to give out balloons on Main Street when we were only 7, 4, and 3 years old,” on their page.

After hearing this, everyone in the Facebook group loved the idea of making magic in the theme parks, so they teamed up to make sure that it would happen.

“Because of this group, we are enabled to make magic for more people than we could alone.

We knew during the lockdown, that without the Disney Parks being open, it was up to us to keep the magic alive. And now that our favorite place in the world is back open, we are determined that more people will feel the magic than ever before.”

What do you think about this story? How much money would you spend on Disney balloons?