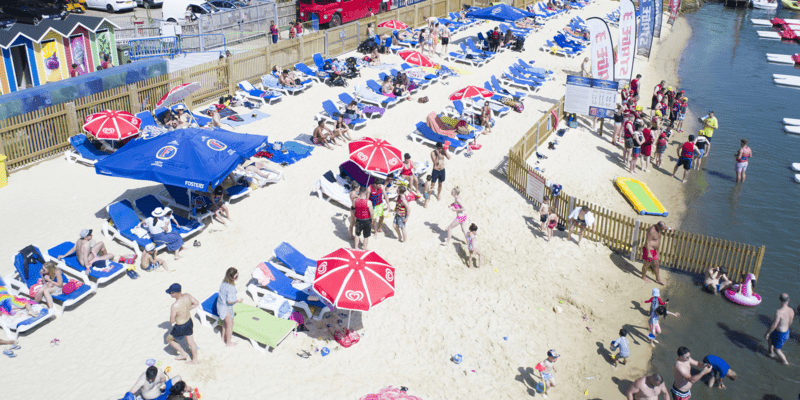 Water parks, like theme parks, are meant to be a place of escape and fun. Resorts across the world welcome millions of Guests year in and year out to experience their attractions, experiences, and activities.

Unfortunately, one water park’s day would end in tragedy after an 11-year-old went missing and sadly died. Liquid Leisure is described as Europe’s Largest Aqua Park and offers a variety of water-based activities such as skiing, wakeboarding, and an assault-style course on a series of inflatables. It is the first official Ninja Warrior UK Aqua Park and can be found in Berkshire’s private freshwater lakes and parkland.

The incident of the little girl getting into difficulty at the activity park, which happened on Saturday, August 6, 2022, has been described as chaotic and traumatic. Sky News reported on the incident, with one witness describing the situation that unfolded on and around the water at Liquid Leisure:

“There was a ridiculous amount of people on the inflatables,” she said. “It was just chaos, people were falling in and jumping off, it would have been hard to keep track of.

“As we were queuing, a woman was running up and down asking if we had seen this girl, she was crying out for her. She gave us her name and description. She did not know where she was.” After ten minutes, she said staff began looking for her “in the changing rooms, on the beach. People were calling out her name”.

The woman said it was another 20 minutes before the inflatables area was cleared and at least 40 minutes before any emergency services arrived on the scene. She said: “There was this young girl running up and down asking if anyone had goggles, shouting ‘we need to look for her under the water’.

“At this point, staff began jumping in the water.”

The witness continued her report, giving a sense of the atmosphere and panic that descended on the Aqua Park:

“It’s a really busy place and there are a lot of people but after about 15 minutes it just went totally silent. I can’t even describe the tension that built up. “In the space of a few minutes when they cleared the inflatables and they got all the staff on them, that’s when it became apparent something was really wrong.”

She has criticised the park and said: “There was no emergency plan. They did not have any tannoy system or any alarm.” She also questioned why people were not asked to leave sooner: “Everyone was standing around watching and it was not helping. It was chaos.”

Another witness, Ms. Cakebread, described how they spotted a group of children and became concerned after one of the young girls had gone under the water and not resurfaced, an event which the lifeguard apparently had also spotted. Cakebread said a “silent panic” had enveloped the Park as lifeguards communicated to each other. She ended by saying:

“Just before we were asked to leave the beach there was a group of parents working in the Ninja Warrior area where they were taking off the velcro strips to try and disconnect the inflatables to look if there was anyone underneath there.”

Thames Valley Police issued their response to the accident at Liquid Leisure, saying:

“We are in the early stages of investigating this incident to understand the full circumstances. There was a swift response from all emergency services and following an extensive search of the lake, the girl, who was 11, was located at around 5.10pm and taken to hospital but sadly died.

“This has been an extremely traumatic and upsetting incident for all involved. I am aware that several members of the public entered the lake shortly after the girl got into difficultly, but were unable to locate her. I would like to commend them for their courage and bravery.”

Liquid Leisure also provided a comment on the tragic accident that happened at their water park. A spokesperson said:

“Our thoughts and prayers are with the family, friends and all those effected by this desperately tragic and upsetting incident.

“As Thames Valley Police are in the early stages of an investigation it would not be right for us to add further comment, but we will continue to fully support and assist them throughout the process.”

Flowers, messages, and sincere condolences have since been distributed by the community at the site with one reading: “To a beautiful little girl. I hope you know how hard everyone tried to save you.”

Liquid Leisure remains temporarily closed and is not taking any bookings.

Inside the Magic will continue to update this tragic story.