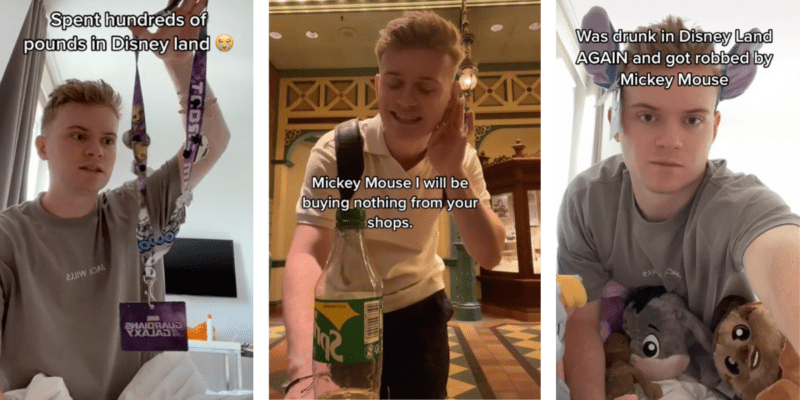 We all get a bit shocked at the receipts from a Disney Parks vacation! For one popular TikToker, Max Balegde (@max_balegde), the shock came sooner than expected.

Max, who has over two million TikTok followers, shared various moments from his vacation at Disneyland Paris, including the first time he got drunk at Disneyland Park to watch the fireworks:

Didn’t mean to say that at the end

“I don’t know if this is against the law, but I snuck a bottle of vodka into Disney World, and I’ve just had the best time watching them fireworks,” Max said while giddily dancing.

The following day, Max responded with a video to a comment that said, “feeling you will regret this in the morning.” Indeed, he did:

Replying to @4loveisland Mickey Mouse expect my legal team to be in touch. #disney #disneyland

“Do not ever get drunk at Disneyland,” Max says. “You don’t understand the amount of money that I spent on things I didn’t need yesterday.”

He shows off a lanyard full of brand new Disney pins, saying he spent around 80 pounds ($94) on it, “This was a product of two glasses of wine. Two glasses of wine and I’m giving it, ‘Oh, I’m a pin collector now!’”

Then, Max shows off what he purchased after sneaking the vodka into the fireworks show: four stuffed animals, two lollipops, and three more trading pins. “I’ve spent £300 on one day on Disney propaganda!”

Later the same day, Max shared a video of himself drunkenly promising not to spend any money on Disney merchandise:

“I’ve only gone and done it again,” Max says. “I sneaked in vodka in my Sprite and put it in my underwear. Mickey Mouse, if you think I want to go into your shop and buy loads of things, you’ve got another thing coming. I’ve got street smarts now, and you are not going to get past me. See you tomorrow when I’ve purchased nothing. Ha ha.”

“I cannot wait to see the purchases,” one fan commented. “Already waiting for the haul,” another said. The comments were correct, indeed:

Replying to @amy..walsh Mickey Mouse I suggest you lawyer up immediately because my legal team will be in touch. #disney #disneyland

The next morning, Max replied to one of these comments with another video. “I’m devastated,” he says. “As you can see, unfortunately, I did get drunk in Disneyland again last night and walked into the world’s biggest, most glorious shop and made some bad decisions.”

He shows off some slippers, Stitch ears, and 12 more Disney pins. “I could decorate a p*ssing wall with them pins,” Max exclaims.

“You might be thinking, did you get any more teddies?” Max asks, showing three more stuffed animals he purchased, including Bullseye from Toy Story (1995). “Lastly, everyone’s favorite character: whatever horsey donkey this is.”

“I’ve bankrupted myself and my future family for the sake of some teddies,” Max says. “How am I going to fit this in my suitcase home?”

Max ends the video with a hilarious warning: “I now speak directly to Mickey Mouse. Dear Mickey Mouse, my legal team will be in touch. You should implement a system in which intoxicated people cannot spend hundreds of pounds in your stores. You make me sick, and I will never think that you’re a nice person again.”

Have you ever spent too much at a Disney Park?

Comments Off on Influencer Goes Viral After Sneaking in Vodka, Drunkenly Spending Hundreds at Disney Park