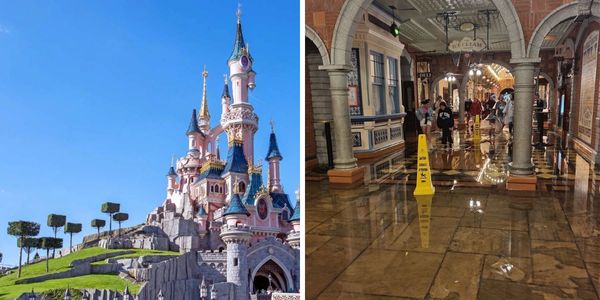 Over the last few weeks, we have seen multiple examples of the intense amounts of rain at quite a few of the Disney Resorts, including Disneyland Paris and Walt Disney World. Due to the severe weather, several attractions were forced to close, and some Guests even had to evacuate the rides.

Recently, a few Guests found themselves in an unlucky position when the rain started – on board the Tomorrowland Transit Authority PeopleMover at Magic Kingdom.

We reported on the Disneyland Paris Resort getting overtaken by the intense rain, with its version of Space Moutain shitting down entirely.

Another look at the Disneyland Paris Resort after the storms was shared online thanks to Disney Cave 0f Wonders (@Cave0fWonders):

As you can see, several ears of the Resort are legitimately underwater, with safety markings placed, so Guests do not slip and fall.

Hopefully, the weather clears up soon, and Guests won’t have to worry about rain or lightning while exploring the Disney Parks.

Have you visited Disneyland Paris recently?