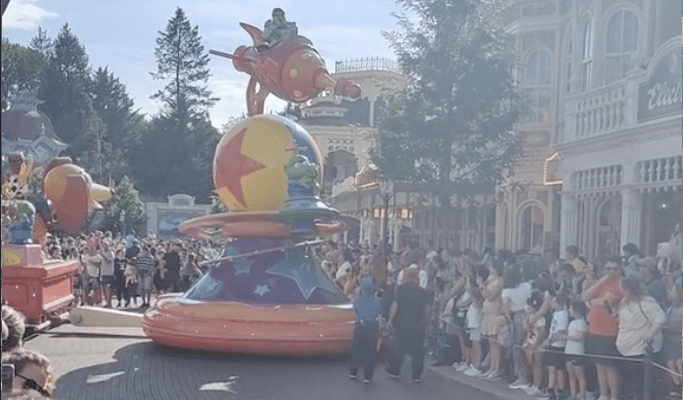 Guests watching the Disney Stars on Parade at Disneyland Paris recently were in for a surprise when one of the parade floats went off-course and crashed into the sidewalk — inches from Guests’ feet.

For starters, if you are not familiar, Disney’s Stars on Parade is described as:

Guests love gathering on the sidewalks to witness the various Disney characters in the parade. However, recently they were in for a surprise when a parade float went off-course.

Twitter user pixiedust_be shared a screenshot of the TikTok, writing:

Parade float hits the sidewalk during Disney Stars On Parade.

According to the TikTok user, there were no injuries and the parade could resume shortly after. You can see the video clip in the TikTok below or by clicking here.

In the new Disney Stars on Parade, “Zip-A-Dee-Doo-Dah” has been removed from the song list. The song is featured in Splash Mountain which is based on Song of the South, arguably Disney’s most controversial film.

Disney Parks announced that Disneyland Park in California and Magic Kingdom Park in Walt Disney World would retheme the attraction Splash Mountain, which is based on the Song of the South IP, as part of Disney’s efforts to bring more diverse representation to the theme parks and remove offensive themes.

The retheme announcement came over a year ago and was met with a variety of responses from Disney fans. Some were very excited and happy to see that The Princess and the Frog (2009), not only an excellent film but a film that stars a Black princess, would replace the attraction. While others who found Splash Mountain as classic and iconic went as far as to petition to have the ride remain as-is.

Related: Guests Treated To Star Studded Cavalcade In The Rain

Have you ever seen the Disney Stars on Parade at Disneyland Paris? Let us know in the comments below.