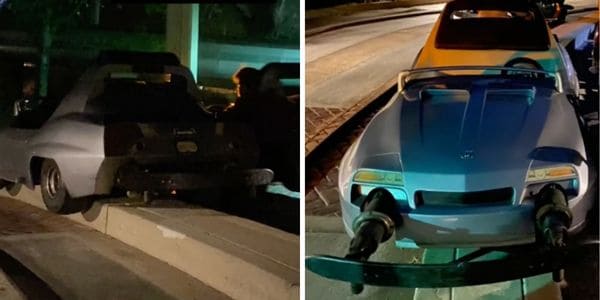 While the Disney Parks have a long and legendary history, this also means that the Parks and Resorts have encountered their fair share of issues, breakdowns, and incidents.

However, it’s not every day you see something like what happened at the Southern California Resort recently.

Autopia is the only existing Tomorrowland attraction dating back to Disneyland Park’s opening day in 1955. When the cars first took to the road, they captured America’s fascination with the latest transportation innovation, the “freeway.”

Over the years, the roadways and car styles have been updated, but the fun stays the same. Autopia is a fully-interactive experience that lets Guests of most ages drive actual, “souped-up coupes.” This attraction is fun but quite tame in today’s standards. Regardless, the ride remains popular with Disneyland Guests to this very day.

However, despite the fact that these cars barely go over 5 miles per hour, an Instagram post shocked the Disney Park community after revealing an entire car derailed at Disneyland’s Autopia. The photos below were shared by @matterhorn_matt9:

In this photo, you can see the derailed vehicle, which somehow made its way on top of the concrete divider.

SOMEONE DERAILED AN AUTOPIA CAR?!?!? THEN ABANDONED IT??
–
I have no clue how they even did it, but I couldn’t get around so got stuck😐 the CMs were dumbfounded by how this even happened and same here

As stated in the Instagram post, we are unsure when or how this accident actually occurred. While breakdowns are common, something like his is incredibly rare and truly is a shocking sight for any Disney Park fan. Disneyland has not made an official statement regarding the incident.

Have you ever witnessed an accident like this at Disney?