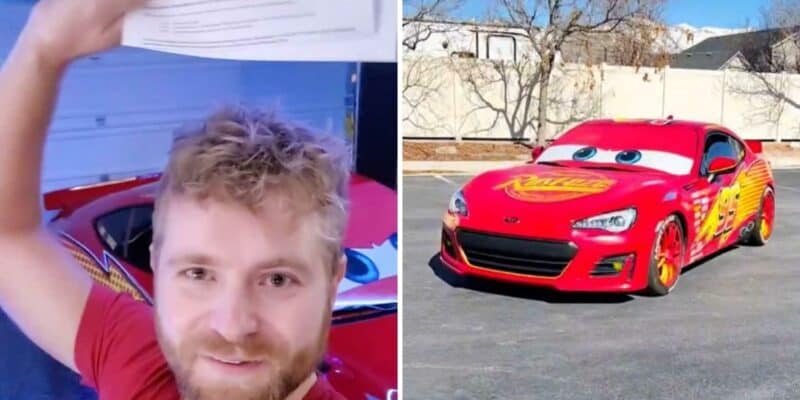 After a year and a half of posting social media content of his prized Subaru BRZ Lightning McQueen replica, TikToker Chris/@ninefivegarage was sued by Disney for “closely resembling their intellectual property.”

Lightning McQueen, voiced by Owen Wilson, is the animated star of Disney’s Cars (2006). The first in a series of 3 films, Cars is about a rookie race car who hits a detour on his way to a career defining race and strands himself in the forgotten town of Radiator Springs. It is there that he discovers what truly matters in life thanks to some new friends and tough lessons.

Cars and its sequels Cars 2 (2011) and Cars 3 (2017) were the inspiration behind Chris’ vehicle, which he’s showcased in multiple viral social media posts. Over time, this attention earned him the title of the largest Lightning McQueen themed account in the world.

It also landed him in some legal hot water. In early April, Chris received a letter from Disney and took to TikTok to share the news. The lawsuit announcement reached more than 1.2 million followers and kicked off a several months long legal battle.

The minute long video was viewed more than 17 million times and earned more than 23,000 comments, informing viewers of his intent to lawyer up.

In the next update, Chris quipped about small changes pitched by commenters that would differentiate his car from Lightning McQueen’s likeness, potentially allowing him to avoid legal trouble. Ideas like changing the numbers on the door, or alternatively naming the car “Thunder McKing” were just two of the proposed solutions.

Chris continued to post content as usual for months without mentioning the lawsuit before finally posting another update in early June.

Again, he joked about the predicament he found himself in by “upsetting the mouse.”

Reply to @wyattengel401 disney’s lawyers are no joke

Reply to @wyattengel401 disney’s lawyers are no joke

The video, captioned “disney lawyers are no joke,” opens with a knelt Chris with a Disney merchandise bag over his head, acting out a scene in which he’s forced to read the words “the car behind me is not actually Lightning McQueen.”

Still, Chris pressed on, posting Lightning McQueen content through the end of July when he shared the “good news and bad news” that he and Disney had finally reached a legal settlement.

Ultimately, Disney would not allow Chris to continue to make content with his Subaru BRZ replica as it was just too identical to the character. They did, however, come to a compromise. Disney signed off on Chris using a different model car for his famed channels, prompting a new Lightning McQueen build using a Corvette.

In true Chris fashion, he posted one final update in which he read a satirical version of the legal documents sent to him by Disney, citing that they were most upset that he “created the world’s first flawless replica.”

Chris has already posted a few videos with his new Corvette, a sure sign that the Lightning McQueen content is here to stay.

Do you agree with Disney’s legal action against Chris? Tell us in the comments.