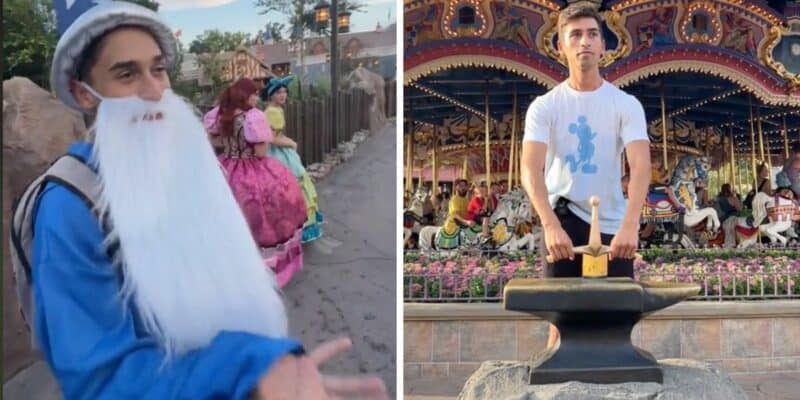 TikToker jojocrichton has been visiting Magic Kingdom nearly every day in an attempt to become the King of Fantasyland. He has become an internet sensation as Guests from all over know who he is now — even Disney Characters!

Disney fan and TikTok user, jojocrichton, has been posting videos to social media showing his attempts at trying to become the King of Fantasyland. In one attempt, he even tried talking nice to the sword, hoping a little flattery would help (spoiler alert, it didn’t):

JoJo has really made a name for himself, as now even Disney Characters know who he is. Recently, JoJo was roasted by the step sisters, Anastasia and Drizella, from Disney’s Cinderella (1950).

In a video posted to TikTok, JoJo can be seen dressed as Merlin to, once again, try and pull the sword from the stone. He was walking around the Park when he ran into Anastasia and Drizella. “Do you have magic?” one of the sisters asked to which JoJo replied “I do, and I know you’re looking for a suitor.”

Well, Drizella did not hold back when she responded, “Well, we’re kind of looking for someone who can actually pull the sword from the stone,” completely roasting JoJo!

You can watch the full video below or by clicking here:

Unfortunately, he has not been deemed worthy (yet), but if you want to follow along on his journey, you can find his TikTok here.

Have you pulled the sword from the stone at Disney World before? Let us know in the comments below.