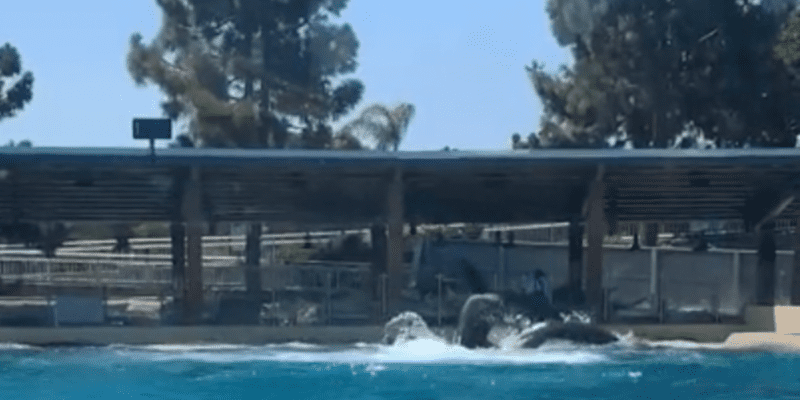 Criminal charges are being sought against SeaWorld following a shocking incident that involved an Orca attack.

However, a recent trip to the San Diego amusement park left many visitors stunned. An Orca attack caught on film by a visitor left several crying, and many others confused.

This morning, PETA shared with Inside the Magic that it had fired off a complaint to San Diego County District Attorney Summer Stephan, calling on her to investigate and pursue cruelty-to-animals charges against SeaWorld for the physical and psychological suffering that orcas have no option but to endure in the theme park’s tiny concrete tanks, including injuries inflicted by incompatible animals. This follows recent eyewitness video footage of an attack among orcas at the theme park, which resulted in a serious wound to one orca, believed to be Corky, the longest-held captive orca in the world.

In the letter, PETA explains that attacks of this kind are rare in wild orca populations and that when they do occur, orcas can flee from conflict to avoid injury. However, SeaWorld’s barren tanks prevent the animals from making that evasive move—and from engaging in natural forms of behavior, including foraging and diving. PETA also contends that SeaWorld knowingly houses incompatible orcas together, putting the animals at risk of severe injury and under constant stress.

“It’s like knowingly housing a violent prisoner in a small cell with a vulnerable prisoner, although in this case, the animals’ only ‘crime’ is to have been born,” says PETA Foundation General Counsel for Animal Law Jared Goodman. “Orcas can swim over 100 miles a day in their ocean homes, but in SeaWorld’s cramped tanks, they can’t escape violent attacks, which adds to their suffering.”

PETA said that over 50 years ago, Corky the orca was captured “rodeo-style” off the coast of British Columbia and sold into captivity, ultimately ending up at SeaWorld. PETA—whose motto reads, in part, that “animals are not ours to use for entertainment”—is pushing SeaWorld to release her and the theme park’s other orcas to seaside sanctuaries, where they could dive to greater depths, swim longer distances, and engage in other types of natural behavior.

SeaWorld has not issued comments on these updated claims from PETA but did offer this statement when the incident occurred:

“The video released by PETA is misleading and mischaracterized. In fact, it shows common orca behaviors exhibited by both wild populations and those in human care as part of natural social interactions.  During the interaction, one of the orcas sustained some minor and superficial abrasions that pose no serious health risk.

“Numerous scientific papers have been published about these behaviors among wild orcas. The papers include documented physical evidence in orcas that resulted from these same types of interactions in the open ocean.”

What do you think of these potential charges against the theme park?