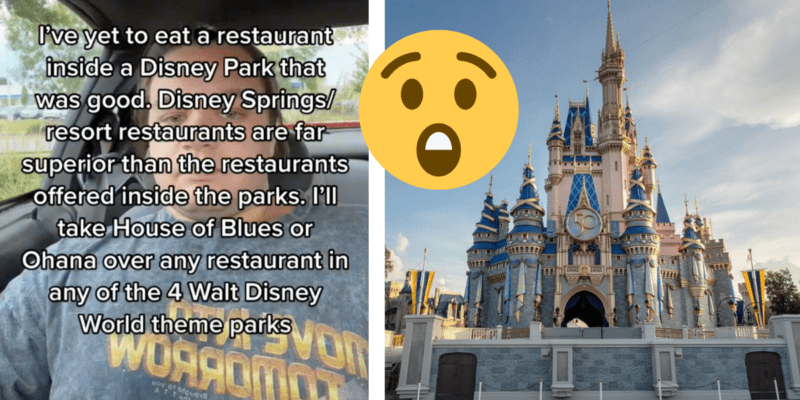 Most discussed are dining options at Magic Kingdom, EPCOT, Disney’s Hollywood Studios, and Disney’s Animal Kingdom. No matter where you’re coming from or where you’re staying, you will most likely visit at least one Disney Park on your Walt Disney World Resort vacation.

Over on TikTok, John Vitale (@johndoesdis) made a video stating his controversial opinion about Walt Disney World restaurants:

♬ original sound – We Are Lost

Vitale’s video shows him sitting in the car and looking around while a popular TikTok song plays in the background. Text on the video reads:

“I’ve yet to eat [at] a restaurant inside a Disney Park that was good. Disney Springs/resort restaurants are far superior than the restaurants offered inside the parks. I’ll take House of Blues or Ohana over any restaurant in any of the 4 Walt Disney World theme parks”

“Have you ever been to EPCOT?” one comment read, to which Vitale replied, “Food booths are better than the actual restaurants 😅”

The only restaurant that got Vitale’s seal of approval was Yak and Yeti, a third-party table service restaurant at Disney’s Animal Kingdom. “That’s my only exception because it is extremely good,” Vitale wrote.

A few commenters agreed with Vitale. “True, I ate at Boat House in Disney Springs. Good food and awesome service,” dara___ann wrote. “Another video proving that [Disneyland Resort] is better because those restaurants are 👩‍🍳💋,” @aundraya_h said.

However, most said Vitale was wrong, giving suggestions like Space 220, Tusker House, and The Hollywood Brown Derby. “Tell me you don’t have taste without telling me,” @hreed__22 argued.

Do you think Disney Parks restaurants are worth it?