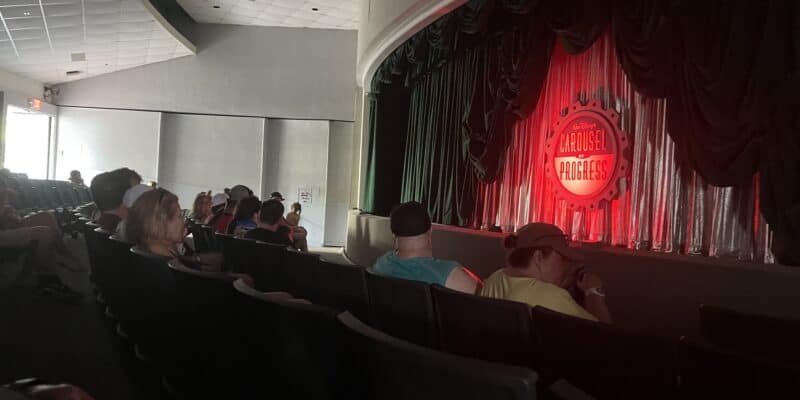 Walt Disney’s Carousel of Progress brings Guests into the rotating theater as they follow an American family over four generations of progress and watch technology transform their lives.

On a recent trip to Carousel of Progress, the Cast Member at the beginning of the show tricked the entire audience into looking for fake seatbelts.

As many of you know, the Carousel of Progress is a slow-moving rotating theater, meaning seatbelts are not necessary for safety, however, one Cast Member had a bit of fun and tricked the entire audience into looking for fake seatbelts.

While waiting for everyone to be seated and for the show to begin, the Cast Member grabbed the microphone and asked everyone to kindly fasten their seatbelts. When everyone started looking to their left and right, the Cast Member then asked who has been on the ride before. When a handful of people replied yes, she jokingly asked “So you understand why we would need seatbelts?”

Everyone laughed to which the Cast Member then said “Enjoy your 20-minute nap”.

This was not the first time a Cast Member pulled this trick as we reported on something similar back in July 2021, which you can read more about here.

We love when Cast Members have fun with Guests as it makes for unique and memorable experiences.

Although Carousel of Progress is a theater, and does not have seatbelts, we do want to note that it is a rotating theater and is considering a moving attraction, meaning Guests must remain fully seated in order for the attraction to operate.

Have you ever experienced something like this on Carousel of Progress? Let us know ini the comments below.