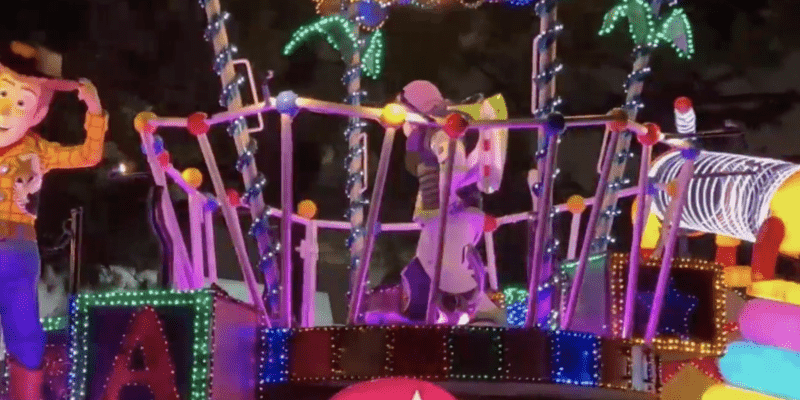 Although the Disney Parks are advertised as perfect and magical places, unfortunately, Disney characters experience wardrobe malfunctions or mishaps from time to time.

In the past, we have seen this happen with Ariel’s fin getting stuck during a performance of Voyage of The Little Mermaid show at Disney’s Hollywood Studios, as well as Mike Wazowski losing an arm during a show in Tomorrowland at Walt Disney World.

A video shared on Twitter went semi-viral earlier today, showing a very peculiar wardrobe malfunction taking place during a Disney parade. You can see the full video linked below:

Twitter user @mo_dona21 shared the video, which shows Buzz atop a parade’s “Toy Story” float. His chest plate somehow fell off earlier in the parade, but the Cast Member continued on and acted as if nothing had happened.

The specific parade shown in the video is the Tokyo Disneyland Electrical Parade: DreamLights, a fun spin on the classic Main Street Electrical Parade at the American Disney Resorts. All of the Disney stars are literally sparkling in this nighttime parade of lights and music.

If “Tokyo Disneyland Electrical Parade Dreamlights” is canceled due to rain, the mini parade “Nightfall Glow” will be presented instead. Minnie Mouse, Daisy Duck, and their Disney Friends want to have a lovely time, especially when it rains! They appear in this shimmering interlude of lights aboard floats that glow in a rainbow of colors to light up the Park on a rainy night.

The parade starts in Toontown, proceeds around the Plaza and through Westernland, and exits through Fantasyland. The parade features Mickey and his pals, including characters from Aladdin, Toy Story, and other Disney films, appearing on colorful floats, nighttime in the Park is even more fantasy-filled.