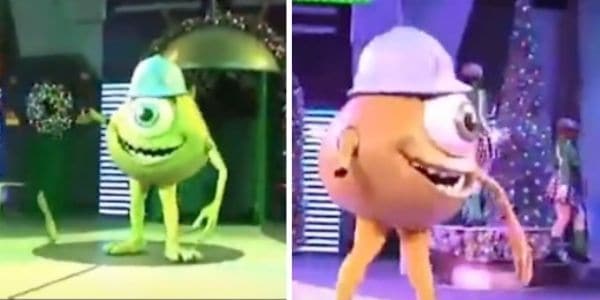 Maybe he could’ve seen this coming if he had more than one eye?

One thing is for certain when visiting the Disney Parks and that’s the characters. Whether you’re in Norway at EPCOT’s World Showcase or Tomorrowland at the Magic Kingdom, Guests are sure to come in contact with some of Disney’s most iconic characters like Buzz Lightyear from Toy Story, Star-Lord from Guardians of The Galaxy, or the big cheese himself, Mickey Mouse.

Through shows, Meet-and-greets, and other activities, Guests have so many options to meet and interact with these characters. Sometimes though, the Cast Members portraying these characters run into issues and have to think quickly while in front of Guests at the Disney Parks.

Related: Disney Characters May End Up Fired If This Happens

The Pixar films Monsters Inc. (2001) and Monsters University (2003) have become classics in Disney’s line of animated films, featuring lovable characters and hilarious situations. In the movie, Mike Wazowski is quite clumsy and does a lot of slapstick and while not planned, he can be seen in a hilarious situation at the Magic Kingdom next to Space Mountain.

In a recent TikTok posted by Disney Stuff Back up (@disney_stuffbackup), Mike can be seen on Tomorrowland’s stage performing for Guests when suddenly, the Cast Member’s costume has a malfunction. See the full video below:

As you can see in the TikTok, Mike Wazowski is dancing around on stage when suddenly he loses an arm. The situation is quite funny but we’d be lying if we didn’t find this a little disturbing.

Have you ever seen a malfunction like this happen to a character at the Disney Parks? What is the craziest thing you’ve seen? Let us know below!