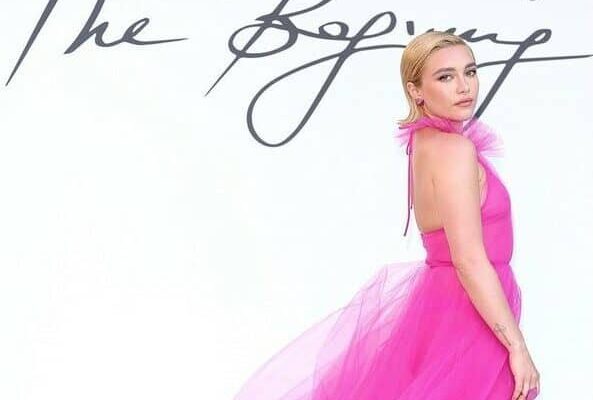 The comments are piling in on Florence Pugh’s recent debut at a Rome fashion show — and the ‘Black Widow’ actor is not going to stay quiet about it.

Apart from Black Widow where she played a central role, Pugh’s character Yelena Belova has also been in the Disney+ Original series Hawkeye (2021), starring opposite Jeremy Renner (Clint Barton/Hawkeye) and Marvel Studios newcomer Hailee Steinfeld (Kate Bishop), and is rumored to be in the upcoming Marvel Cinematic Universe Thunderbolts movie, slated to close off Phase Five.

Last July, Pugh’s bright pink, sheer number at a Valentino couture show in Rome showed off her naked breasts unapologetically, causing a storm online — both in condemnation and support, as people weighed in on the star’s body.

Pugh posted about the dress here on Instagram, thanking her team for helping her make her “pink princess dreams come true”:

Her choice of dress definitely inflamed several people on social media, however. Speaking to Harper’s Bazaar for Don’t Worry Darling, Florence Pugh opened up about receiving such blatant hate for her sheer dress.

The following may contain language unsuitable for younger readers.

She continues, explaining her stance after receiving a “deluge of internet nastiness”, according to Harper’s Bazaar:

Pugh expands on this in another Instagram post directly firing back at haters and questioning the backlash:

What’s been interesting to watch and witness is just how easy it is for men to totally destroy a woman’s body, publicly, proudly, for everyone to see. You even do it with your job titles and work emails in your bio..?

[…] Why are you so scared of breasts? Small? Large? Left? Right? Only one? Maybe none? What. Is. So. Terrifying.

With the sheer amount of backlash over the “inch of darker skin” as Pugh puts it, it’s evident that the Oscar nominated actor is not going to put up with the criticism — and she isn’t the only one.

Clearly, the #FreeTheNipple movement continues on despite the nasty comments.

What do you think of Florence Pugh firing back at the angry commenters? Share your thoughts below!