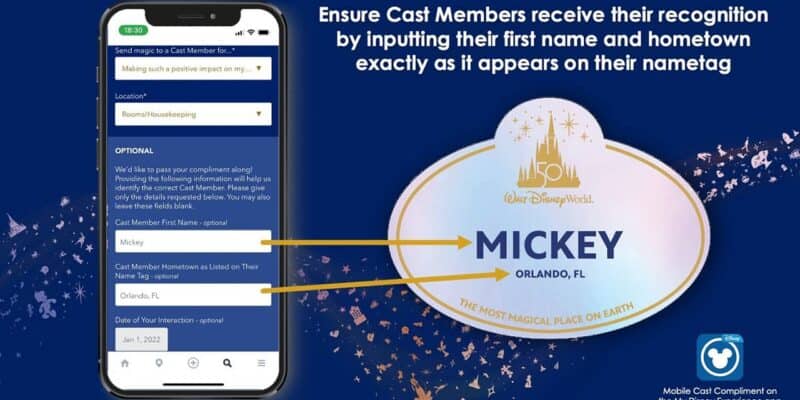 Last October, Disney launched the Mobile Cast Compliment feature in an effort to streamline the process of recognizing someone working at Disney for a job well done. In just six months, the app had surpassed 100,000 comments according to a report by Disney Parks Blog.

Unfortunately in some cases, the app doesn’t seem to record the compliments to any specific person as per the experience of a current Cast Member, who took to Reddit to urge people to compliment CMs the old fashioned way.

So everyone knows…
Don’t do a cast compliment on the app please go to guest relations or talk to someone in the blue shirts. Unfortunately some locations, like mine, don’t put the recognizition on our record card or even talk about it. The only ones that get placed/talked about are from gr so please just go to gr or the blue shirt guys.

So everyone knows… from WaltDisneyWorld

According to the original poster, compliments received via the app are not entered into the employees record, nor are they verbally recognized like they are when compliments are made directly through a member of Guest Services.

“I’ve had guests put in a CC using the app in front of my face a couple times but never saw anything of it. My area has… interesting leadership lol. It sucks!!”

Several commenters wrote that they were sad to read this feedback, as they’d been instructed by anyone they encountered to utilize the app for Cast Compliments.

Unfortunately I tried to do that two times on my last trip because I wanted to be able to say what the cast member actually did that was so wonderful (the app just has you pick from a drop down of choices) and both times I was told the only way to do it was through the app.

Mistertruth speculated on the cause of this, claiming that it sounds like a way to cut costs. “Harder for cast members to get recognition by guests?” he asked. “Harder for them to argue for a raise.”

Given that the feature is under a year old it likely has some kinks that still need to be worked out, though it comes at a time when Cast Members could use the compliments the most after reports of low wages and dissatisfaction in the workplace have surfaced.

Even Guests are beginning to notice that the Cast Members deserve more.

The silver lining lies in the amount of commenters who inquired about ways to ensure Cast Members were receiving proper recognition from their comments, with many offering to email, Tweet, and even handwrite feedbak to ensure proper delivery. In the meantime, here’s hoping that the tech catches up to the kindness.

Have you experienced issues with the Mobile Cast Compliment feature? Let us know in the comments below!