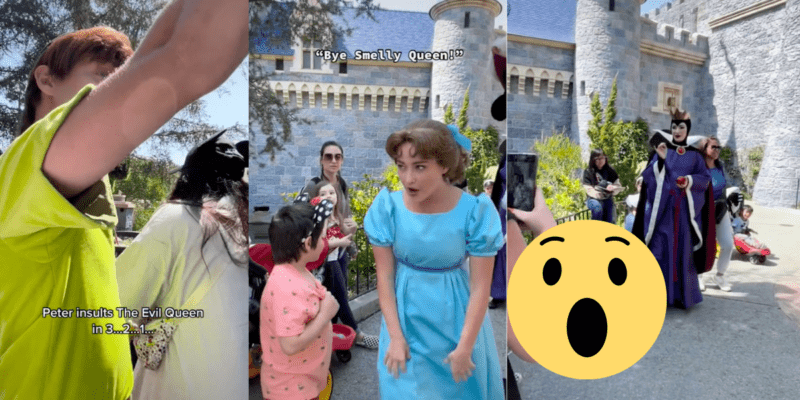 Disneyland Resort is The Happiest Place on Earth, where characters from your favorite Star Wars, Marvel, Walt Disney Animation Studios, and Pixar films come to life right before your eyes.

With so many iconic heroes and villains walking through Disneyland Park and Disney California Adventure, some conflict will undoubtedly come along the way! @mrs.everdaymommy shared a video showing a silly interaction between Peter Pan and the Evil Queen:

“Wendy, come on! We have to go check on the Lost Boys,” Peter Pan says in the video. As Wendy and Captain Hook catch up to Peter, he shouts, “Bye, Smelly Queen!” at the Evil Queen from Snow White (1937).

Wendy admonishes Peter Pan for insulting the dastardly villain, but a bunch of children can be heard chanting “Smelly Queen!” as the most famous Lost Boy and his crew walk away. The Evil Queen doesn’t react and continues greeting Guests by Sleeping Beauty Castle at Disneyland Park.

Of course, this is all in good fun! Cast Members make the magic happen daily with little moments like this one.

Peter Pan (1953) is a classic Walt Disney Animation Studios film, despite controversy over racist depictions of Native Americans. From Disney:

Have you met Peter Pan at Disneyland Resort or Walt Disney World Resort? Share your experience with us in the comments.