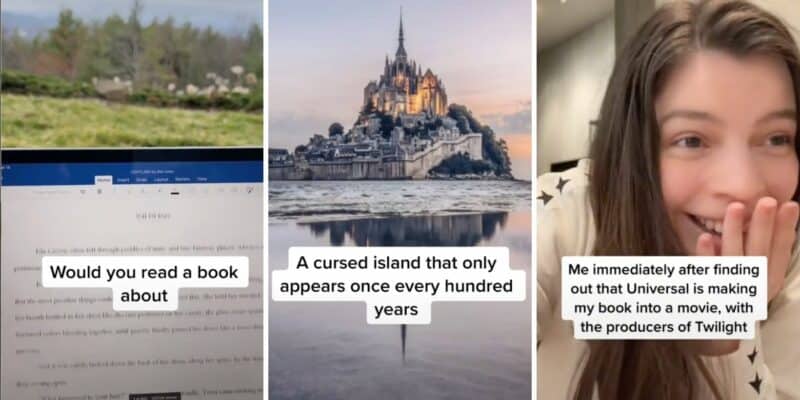 Last year, TikToker Alex Aster “got bored and made a video” asking viewers if they’d be interested in her book idea.

Today, Alex’s “Lightlark” is a Barnes and Nobles best seller and Universal has signed her for a film deal, all while the  book is still in its pre-order stage.

Related: Universal Could Bring Back Retired Attractions in New Experience

Here is the video that started it all:

The video has earned more than 300 thousand likes and over 8 thousand comments, with viewers excited to learn more about “Lightlark.” The official book description from Bookshop.org reads as follows:

Welcome to the Centennial.
Every 100 years, the island of Lightlark appears to host the Centennial, a deadly game that only the rulers of six realms are invited to play. The invitation is a summons–a call to embrace victory and ruin, baubles and blood. The Centennial offers the six rulers one final chance to break the curses that have plagued their realms for centuries. Each ruler has something to hide. Each realm’s curse is uniquely wicked. To destroy the curses, one ruler must die.
Isla Crown is the young ruler of Wildling–a realm of temptresses cursed to kill anyone they fall in love with. They are feared and despised, and are counting on Isla to end their suffering by succeeding at the Centennial.
To survive, Isla must lie, cheat, and betray…even as love complicates everything.
Filled with secrets, deception, romance, and twists worthy of the darkest thrillers, Lightlark is a must-read for fans of legendary fantasy writers Marie Lu, Marissa Meyer, and Leigh Bardugo.

As seen in her TikToks to follow, Alex would spend the next year becoming a verified account, working with major book stores on pre-sales, scheduling tours, and more. Her videos have a combined 15.2 million likes from users who regularly fill her comment sections with book update requests.

On July 20, she shared this breaking news with more than 870 thousand followers:

Shaking. The only way to get a first edition of Lightlark is to preorder now! #lightlark #booktok #bookstan #books #dreambig #bigdreams #authortok #bookclub

Shaking. The only way to get a first edition of Lightlark is to preorder now! #lightlark #booktok #bookstan #books #dreambig #bigdreams #authortok #bookclub

In the video, Alex shares that she had been rejected hundreds of times before her viral success on TikTok helped her get published.

Now in this most recent update, Alex shared that Universal Pictures has picked up “Lightlark” and will be making it in to a film with the help of the producers of The Twilight Saga, a series that saw phenomenal success in both bookstores and box offices. The movie deal comes before customers can even purchase the book in stores. She added that she too would serve as an executive producer.

Her fans commented by the hundreds in support of her accomplishment. “ARE YOU KIDDING?!?!?!?!? user @laurens1ibrary asked. “IM SCREAMING.”

There are dozens of replies calling the news amazing and well deserved.

“That’s mad, before people have even read the book??” @lyd710 asked. “Producers must have LOVED the story line!!!”

Alex’s book has received rave reviews by several #1 New York Times Best Selling Authors, one calling it a “gorgeously lush and cinematic” page turner. It is available for pre-order now, with a ship date of August 23, 2022.

Based on the books already viral success, this won’t be the last we hear of Alex Aster. Check back with Inside The Magic for updates on “Lightlark.”

Have you read the book? Let us know in the comments below.