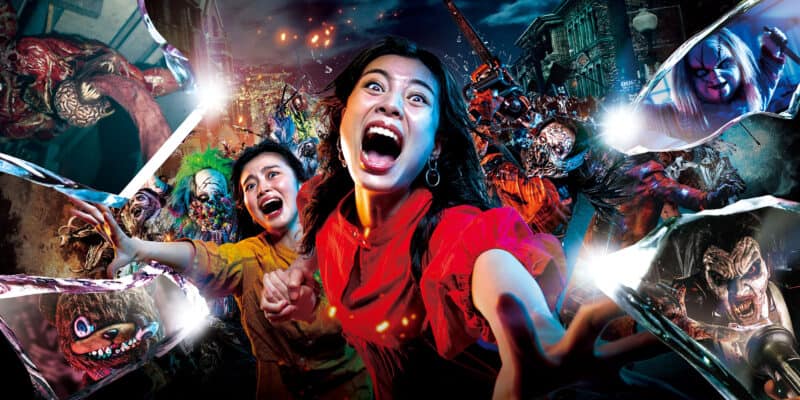 With the full lineup for this year’s Halloween event, horror fans are eager to experience the terror and thrills that will haunt Universal Studios.

As Universal Studios Parks worldwide continue gearing up to terrify their Guests with this year’s Halloween events, one location has received lots of attention with the different experiences that will return to the Park this year.

Related: Universal Studios Will No Longer Include Mazes on This Year’s Halloween Event

Universal Studios Japan recently announced its chilling event, NO LIMIT! Halloween, which will be returning to the Park in full for the first time in three years with terror and thrills like never before. The event will take place on select nights from September 8 to November 6, 2022, with horror mazes, scare zones, and entertainment offerings, as well as family-friendly entertainment and exclusive character interactions.

The Great Horror is Baaaack!!!!

Halloween Horror Nights is back with terror and thrills like never before!
Survive the onslaught of a zombie horde in our most nightmarish Street Zombie event ever—now featuring projection mapping! Survive with friends in a fight against bloodthirsty creatures in Biohazard™: The Extreme +. And don’t miss Universal Monsters: Legends of Fear, inspired by the highest rated maze at Halloween Horror Nights in Universal Orland Resort. This full lineup of horror attractions is back for the first time in 3 years!
Escape day-to-day stress with incredible thrills and chills possible only during Halloween at Universal Studios Japan!

The event will house three horror mazes for Guests to explore if they dare.

Following the massive success of Universal Orlando Resort’s Halloween Horror Nights, Guests will be able to experience the fear as they try to escape a dark graveyard full of Universal’s classic monsters, including Werewolf, Frankenstein, and Dracula, facing one unexpected and fierce attack after the other.

This horror maze inspired by the Resident Evil franchise and improved for this year’s event will offer two alternative routes for Guests to choose from as they escape the Raccoon City Police Station. Guests’ choices will affect their experience through this maze, as they face even more attacking creatures like Tyrants and Rickers with their friends and enjoy the ultimate sense of thrills and excitement.

Guests will try to escape the slaughter at a hospital overtaken by the evil Chucky doll. This is one of Universal Studios Japan’s most famous horror mazes and its longest-running one.

In addition to these mazes, Guests will be able to enjoy “Sherlock Holmes: The Curse of the Rose Sword,” a horror theatre show, as well as “Street Zombies,” the largest swarm of zombies in the Park’s history which will now feature projection mapping to provide a more immersive experience for Guests.

The Universal Studios Japan will also home “Zombie de Dance,” a dance party that will dominate the Park with 6 stage shows and new horrors, with the extremely popular “Ratata Dance” returning to the Park for the last time. And for those needing more Rat-tat-tat, Guests can also listen to the popular Sandamine J Soul Brother’s song on Hollywood Dream: The Ride!

And for Guests looking for a family-friendly experience, several characters will meet Guests in their Halloween costumes. Universal Studios Japan lists the following Halloween-exclusive greetings:

With so much to see and do, it’s no wonder Guests are eager to feel the adrenaline and thrills at Universal Studios Japan this year.

Will you attend Halloween Horror Nights at Universal this year? Let us know in the comments below!