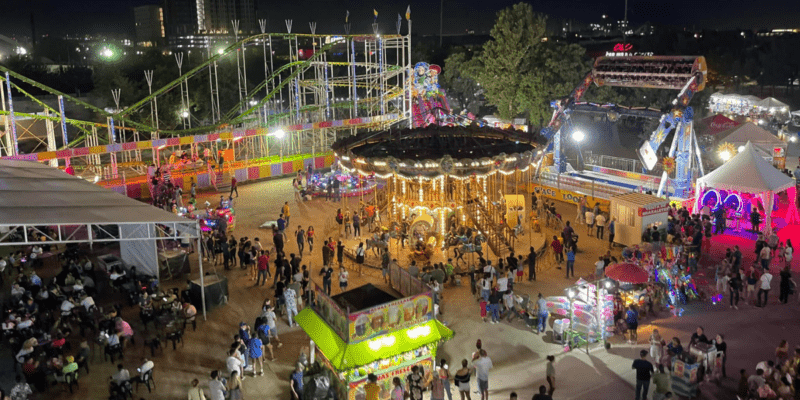 Guests recently had a terrifying experience after a power outage left them hanging, screaming for help, on a popular attraction.

A group of people was left hanging in mid-air while riding the popular attraction “G Force,” which suddenly stopped due to a power outage, allegedly caused by a failure in the attraction’s power generator. The incident happened last Monday, July 25, at the “Gran Feria Fundidora,” a famous fair that takes place every year at Parque Fundidora in Monterrey, Mexico.

While there were no reported injuries after the incident, the group remained on the ride for nearly 20 minutes, screaming for help as bystanders were shocked to see the ride stop. Local authorities and event organizers did not release any statements regarding the incident.

Unfortunately, this is not the first time an unfortunate incident has occurred at “Gran Feria Fundidora,” as ”here have been comments online saying this appears to be a growing trend at the fair.

Yadith Valdez (@yadithvaldez) shared a video commenting that a different attraction at the fair was practically split in two, causing panic among the young Guests who were riding “El Gusano,” a kiddie coaster, as they waited to be evacuated with a ladder. Yadith shared a video you can see below:

Last night an attraction, practically split in 2, at the Parque Fundidora fair, causing alarm among the people riding “El Gusano.” Those affected waited to be helped, until they were lowered with a [ladder] @PC_NuevoLeon

Yadira added that no local authorities arrived at the scene and that although there were no injuries, several Guests suffered nausea after being evacuated by a ladder, with no safety protocols whatsoever. She also mentioned the G Force incident previously stated.

User @duronidas posted a video in response to these incidents, commenting that this seems to be common now at the fair, as another attraction can be seen with two carts completely stopped while three ride operators are literally climbing the roller coaster. It is unclear if the operators evacuated the people riding the attraction or if they had to be evacuated, again, with no safety protocols.

It is common now

While it is true that this event is temporary and the attractions are more carnival-like, many consider that specific safety measures and regulations should be instated by local authorities and officials of the event to ensure the safety and enjoyment of everyone visiting the fair.

“Gran Feria Fundidora” returned to Parque Fundidora in Monterrey, Mexico, for the first time since 2020 due to the ongoing COVID-19 pandemic. It was opened on July 1 and will close tomorrow, July 31, after a month of fun and entertainment for the whole family, with over 50 attractions, circus presentations, children’s shows, box and Lucha Libre presentations, and so much more!