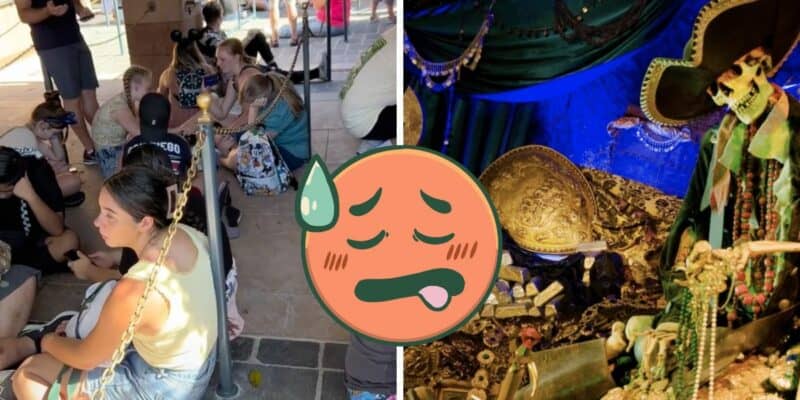 A TikTok video shows a long Pirates of the Caribbean queue of crouched Guests stealing shade where they can, only to have the attraction shut down before they can even ride.

User Vanessa M., a self proclaimed Disney Mom and Parks fanatic, taped her perspective and shared it to the platform during a recent trip to Disneyland in California.

Reopening of POTC had alot of technical difficulties and ride kept closing. #disneyland#piratesofthecaribbean#pirates#dlr#orangecounty#disneyparksblog#disneytok#disneytiktok#disneytiktokcommunity#disneylandcalifornia#iwanttogohome#sohot

Reopening of POTC had alot of technical difficulties and ride kept closing. #disneyland#piratesofthecaribbean#pirates#dlr#orangecounty#disneyparksblog#disneytok#disneytiktok#disneytiktokcommunity#disneylandcalifornia#iwanttogohome#sohot

Dozens of commenters weighed in on Vanessa’s experience, some with laughter and some with empathy.

“Pirates broke down numerous times today, so did Indiana jones and thunder mountain actually closed late morning and never re-opened,” wrote @user7885496108310. Others shared that they simply wouldn’t wait for the ride at all.

Though it has undergone some renovations over the years, accounts of the ride continuing to break down appear to be mounting at all locations. Just a few months ago, Guests were evacuated from the stalled ride with a well-lit, prime view of the attraction’s massive ship.

Related: Pirates of the Caribbean Left Covered With Construction Walls as Ride Shuts Down

Located in New Orleans Square at Disneyland Park, the Pirates of the Caribbean pictured in the TikTok video above invited Guests to “steer a course for the Golden Age of Piracy on a swashbuckling cruise through seas plagued by scoundrels,” per the theme parks description:

Some Park-goers consider the ride nostalgic and a must-do, while others have grown tired of the above complications.

What is your opinion on this Disney deemed “beloved classic?” Tell us below!