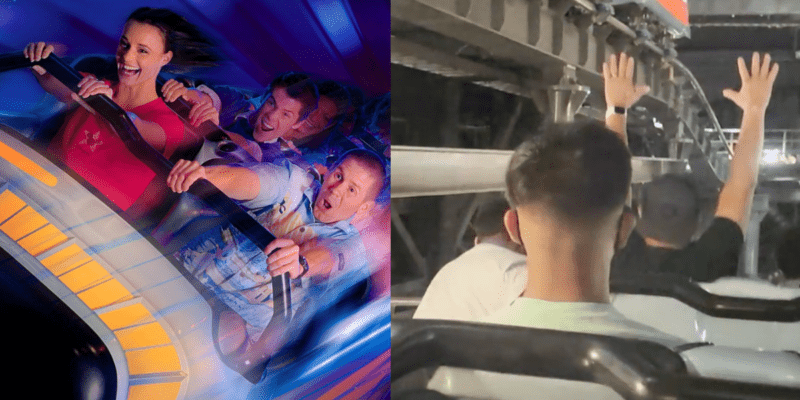 Even at the Happiest Place on Earth, things don’t always go as planned. That doesn’t stop Cast Members and Guests from making magical memories!

In Disneyland’s Tomorrowland this week, Space Mountain, currently overlayed as the beloved Star Wars-inspired Hyperspace Mountain, broke down mid-ride. The lights in the dark ride came on, a coveted experience for many Disney Parks fans.

Reddit user u/AndyWarwheels shared a 52-second video from their ride. Their space vehicle was temporarily stopped mid-ride. A Space Mountain Cast Member grabs the car tightly and physically forces it down the tracks, running along with the Guests until the ride vehicle can propel itself.

If you get stuck on Space Mountain they push your car back to the station. from Disneyland

The Guests ride a silent Space Mountain for less than a minute before reaching the loading era, going through the attraction’s iconic tunnel, which is a plain back instead of glimmering with colored lights. The Guests even got photographed. (Though, the Guest said Disneyland did not provide them with that ride photo.)

The Guest reported that the ride went slower than usual because it was propelled by human speed instead of electricity. However, they still felt “very lucky” to have this rare experience on Space Mountain, especially with the lights on.

This Disneyland Cast Member made a magical memory these Disney Park Guests will never forget!

Space Mountain is a classic attraction at Disneyland Resort, opening in 1977. From Disney:

Have you ever ridden Space Mountain with the lights on?