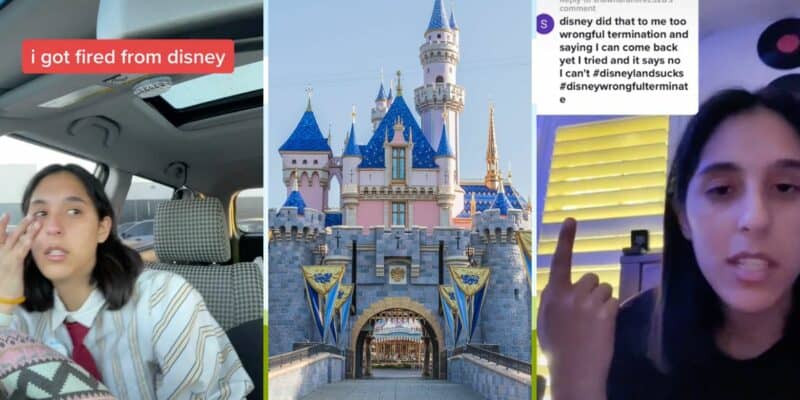 Earlier this month, Inside the Magic reported about a former Cast Member who took to TikTok to share her experience with Disney after they fired her with no warning. Following her post, more Cast Members are coming forward with wrongful termination claims.

In the original video, TikTok user @selena.crowther, still dressed in her uniform, shared a tearful account of her last day working for Disneyland. The caption read as follows:

i believe disney did not take the proper steps in fixing this. The person who reported never came to me to let me know nor did disney give me any warning… i have full availability and they never once put me in a different shift as the person i was making feel “uncomfortable” #disney #disneyland #fyp #foryou

i believe disney did not take the proper steps in fixing this. The person who reported never came to me to let me know nor did disney give me any warning… i have full availability and they never once put me in a different shift as the person i was making feel “uncomfortable” #disney #disneyland #fyp #foryou

In the video, @selena.crowther states that she arrived to work only to be routed directly to a manager, who would tell her that she was being fired as a result of multiple complaints filed against her by fellow Cast Members. According to these complaints, @selenacrowther made her coworkers feel uncomfortable, to which Disney responded by promptly firing @selena.crowther.

The former Cast Member maintained her innocence. She shared that felt these complaints were solely made in retaliation, initiated by someone she and a few other Cast Members had previously reported for harassment, who had also been let go by the company. She claims she overheard that this scorned employee planned on recruiting friends to file false reports as payback for the initial complaint filed against him.

She stated that rather than being offered a solution, or being asked for her side of the story, she was instead quickly terminated and encouraged to reapply again in six months.

The original post has gained significant traction on social media with over 1.2 million views in under ten days, inspiring additional former Cast Members to come forward and share similar stories.

In the first update video, the TikToker shared that a friend of hers was also terminated, citing the same inaccurate grounds and calling the outcome “outrageous”:

In a second update video, @selena.crowther responded to a commenter who stated that they too had been wrongfully terminated:

She also shared in this update that she’d been in touch with her union regarding the issue, and expressed disappointment that further action had yet to be taken more than a week after she made contact. She claimed that her termination wasn’t treated with the same diligence as the Cast Member who she originally reported for harassment.

In her most recent video update, @selena.crowther spoke directly to Disney:

She talked about her commitment to a job she loved.

“I live in Riverside. I had to drive 45 minutes to an hour on the 91 freeway in 100 degree weather just to get to the cast member parking lot. And I was so paranoid about traffic, that I would get there up to two hours early just to sit in my car and listen to music, all with no A/C because it doesn’t work in my car. If that doesn’t show you how dedicated I was to the company, I don’t know what will.”

She ended the video with a plea to return to work.

“Please, can I have my job back?” she asked. “Showing up at Disneyland every day and making kids smile just made my day.”

Do you think Disney should reconsider their decision to let this Cast Member go? Let us know in the comments!