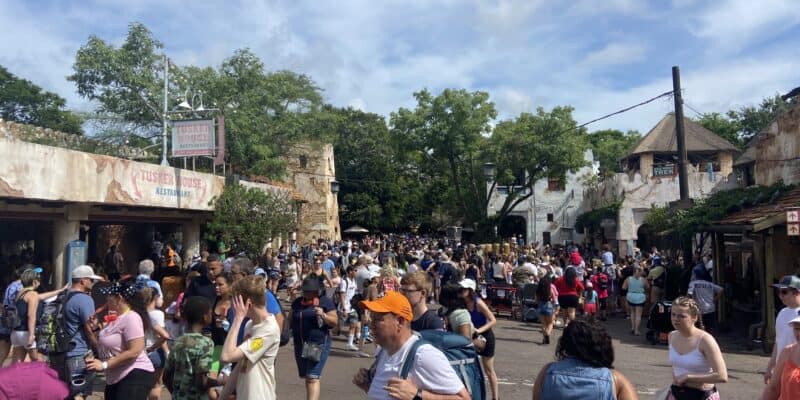 In a video posted to social media, Cast Members can be seen ushering Guests away from what the poster claims was an escaped monkey at Animal Kingdom, located at Walt Disney World Resort.

From the moment Guests enter Animal Kingdom, they’re greeted by a densely covered walkway lined with natural animal enclosures known as The Oasis Exhibits. The lush path is home to animals such as the giant anteater, barking deer, spoonbills, wallabies, and boar, and eventually parts to reveal the infamous Tree of Life.

Disney World’s Animal Kingdom is well known for offering an up close and personal look at some of the world’s most incredible wildlife. Well, some Guests got closer than most, as one monkey appeared to escape the enclosure it usually calls home.

As seen in the video below, Cast Members contained the animal with butterfly nets and blocked off the area until it was safe again. User @hannahshrodes shared the encounter on TikTok yesterday:

Read on for more information straight from Disney about where to see the wildlife that inhabit Animal Kingdom.

Disney’s Animal Kingdom is home to various locations, including Asia, which Disney describes as:

Behold some of the most amazing animals from across the largest continent on Earth.
Explore a mystical forest on Maharajah Jungle Trek, where you’ll discover awe-inspiring creatures at every turn.

Over in Africa, Guests can experience Kilimanjaro Safaris and Gorilla Falls Exploration Trail. Per Disney:

See some of Africa’s awe-inspiring animals—from mighty elephants to fabulous flamingos.
Look for African animals during a scenic stroll along the Gorilla Falls Exploration Trail. Or, ride around sprawling wildlife habitats on Kilimanjaro Safaris.

In Discovery Island, Guests can look for wildlife including flamingos, otters, vultures, and more. Per Disney:

Look for wildlife as you explore wilderness trails brimming with fun details.
Take a leisurely stroll along the Discovery Island Trails, featuring tranquil pathways around the Tree of Life.

While Guest entertainment is always a desired outcome for Disney when it comes to wildlife experiences, they also prioritize their conversation efforts, as written in their statement below:

The Walt Disney Company is committed to protecting animals and their habitats—here and around the world.
Here are just a few of the conservation efforts in place at Walt Disney World Resort:

Earth Day Celebration: On select dates in April, join us to celebrate Earth Day at Disney’s Animal Kingdom theme park—and connect with the magic of nature!
Conservation Around the World
Disney Conservation helps to save wildlife and build a diverse global community inspired to protect the magic of nature together. Since 1995, Disney Conservation has directed more than $120 million and the expertise of our dedicated teams to support organizations working with communities to save wildlife, inspire action and protect the planet.

The Disney Conservation Fund is supported by The Walt Disney Company and Guests of Walt Disney Parks and Resorts, with 100% of Guest contributions matched by Disney and directed to nonprofit organizations. Additionally, Disney covers all costs of managing the fund. The Disney Conservation Fund is not a charitable organization, and donations are not deductible as charitable contributions for US tax purposes.

What is your favorite wildlife experience at Animal Kingdom? Comment below!