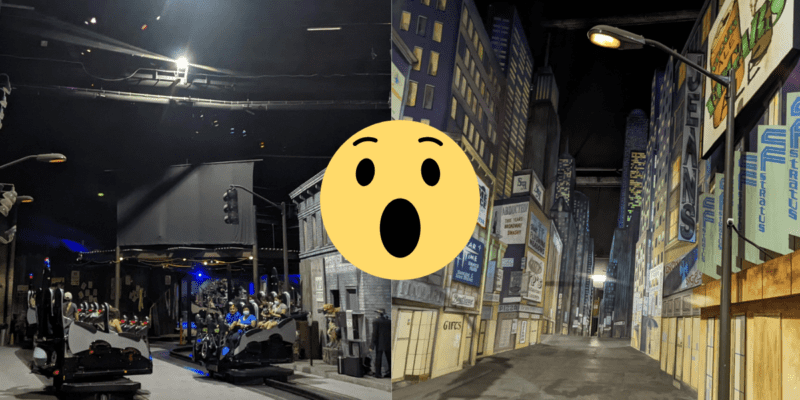 Sometimes, a ride breakdown is a blessing in disguise! Guests onboard Universal Orlando’s MEN IN BLACK Alien Attack got an insider look at the ride’s detailed set with the lights on.

u/aldoditt shared seven photos of MEN IN BLACK Alien Attack, which opened in 2000 and is based on Men in Black (1997), starring Will Smith as Agent J (Jay) and Tommy Lee Jones as Agent K (Kay).

This first photo shows the detail of the “Millenium Multiplex” theater and a New York City hot dog cart.

The next photo provides a closer look at the movie theater advertising a Classic Sci-Fi Film Festival. More of the ride track and ride vehicles carrying other Universal Orlando Guests are visible.

This similar picture provides a better look at the bottom of the ride vehicles and the usually hidden ceiling.

This photo shows an armored alien, one of the hundreds created for MEN IN BLACK Alien Attack, standing in front of a New York City newsstand and a few billboards. The newspapers all contain stories about aliens invading New York, keeping on theme with the ride.

The following picture gives some insight into the way Universal Orlando makes MEN IN BLACK Alien Attack look bigger than it is! Despite the buildings and concrete just being set pieces, the forced perspective makes it appear that Guests are looking down a real New York City street.

This picture shows one of the ride’s screens still working despite the breakdown, warning riders of a “HOSTILE ALIEN ALERT” in Manhattan.

The Universal Studios Florida Guest saved the best photo for last: a close-up look as a terrifying alien peers around the corner of a candy store at Guests trapped in their MEN IN BLACK Alien Attack ride vehicle.

Save New York City from an alien invasion! This motion simulation ride at Universal Studios Florida has a 42-inch height requirement. From Universal Orlando:

So Many Species, So Little Time

You’ll encounter 120 different kinds of aliens, many created specifically for this ride.

No Déjà Vu for You

Have you ever been on a Universal Studios Florida or Islands of Adventure attraction with the lights on?