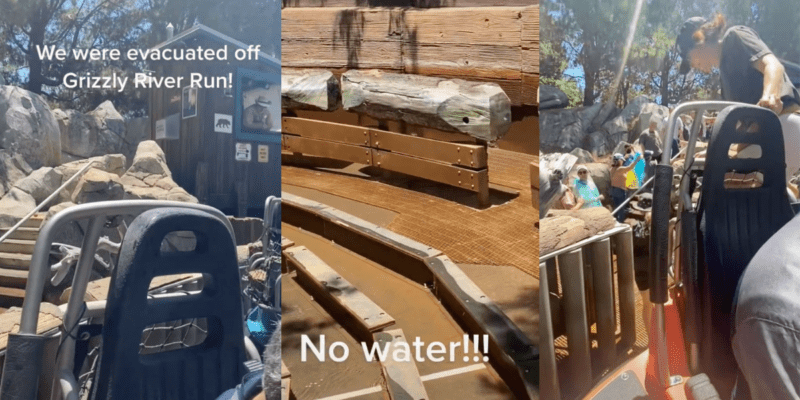 If you’ve ever been evacuated from a ride at Disneyland Resort, you’ll know that it typically happens due to mechanical issues and technical errors. But sometimes, things get a bit more… interesting!

A recent Disneyland Resort Guest was evacuated from Grizzly River Run in Grizzly Peak at Disney California Adventure Park. Kelly, @arendellekel, shared a video of her experience on TikTok:

We got evacuated on #GrizzlyRiverRun at Disneyland! A person jumped off the ride! 😳😅 #disneypark #fyp #Disney #disneyparks #CaliforniaAdventure #themepark #PlutoTVIsFree #uhoh #adventure

In the video, the Guests sit in the ride for 20 minutes while it is drained and Cast Members bring ladders to each raft for Guests to climb down. The Guests were even able to see the inside of some of the fake rocks throughout Grizzly River Run as they were led through a backstage area to evacuate.

After safely evacuating, Kelly explains that another Guest jumped off of the ride, which led to the evacuation.

“I don’t get it,” Kelly says in the video. “You ruin it for everyone, you know you’re gonna get banned, and you just wasted 150 bucks to get in. Craziness!”

Despite the Grizzly River Run hiccup, Kelly isn’t upset, and looks forward to getting food and continuing her day at Disney California Adventure.

Are you brave enough to journey into the mountains on a whitewater raft? You must be 42 inches tall to ride Grizzly River Run and it’s recommended for kids, tweens, teens, and adults. From Disney:

Embark on a thrilling whitewater raft adventure that splashes you down a roaring California river deep in the mountains.

Have you ever been evacuated off a ride at Disneyland Resort or Walt Disney World Resort? Share your experience with us in the comments.