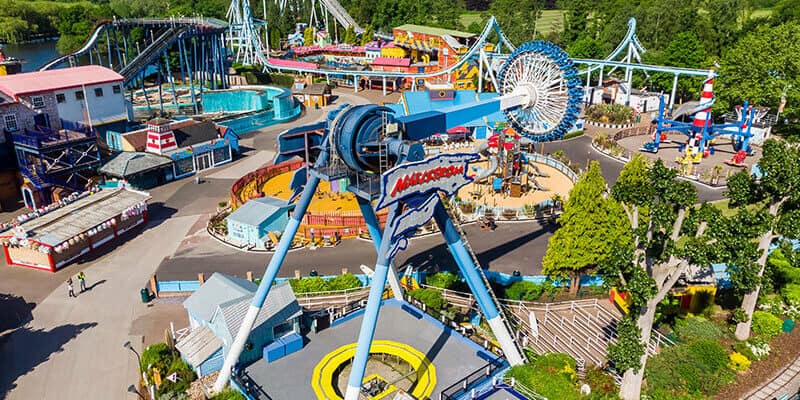 It would appear that ride malfunctions are becoming more common at theme parks worldwide.

Guests visiting Drayton Manor on July 20 experienced an unexpected breakdown on one of the Park’s newest attractions.

On a couple of videos posted by Joe Faulkner (@ThemeParkFaulk), that have since been deleted, a nearly full giant wheel is completely stopped in the middle of the track, as Thor, one of Drayton Manor’s most recent attractions, presented an unspecified malfunction. Inside the Magic was able to grab screenshots of these videos prior to them being removed, which you can see below.

In a second video, which has been deleted as well, Faulkner showed the giant wheel at the ride’s launch station, having to be spun manually by Park personnel to make sure that it aligned correctly on its homing position to allow Guests to evacuate the attraction safely.

Faulkner commented, “this is the coolest thing I’ve seen,” as he was amazed by the process carried out by Park personnel. Faulkner did not disclose the reason for the removal of these videos.

As of the publication of this article, Drayton Manor has not released any statements addressing the incident. However, all Guests aboard the attraction seemed safe, and the cause of this incident was most likely a minor malfunction on the attraction.

More on Thor at Drayton Manor

The eagerly awaited Disk’O Coaster opened on May 28 as part of Drayton Manor’s new Viking-themed land.

Per Drayton Manor’s official website, Thor is a brand-new, vibrantly colored family thrill ride named after the infamous god of thunder. It will send Guests spinning on a giant wheel across a coaster track for the ultimate weightless sensation.

Vikings is home to 4 exciting attractions and a Viking-themed restaurant, Walhalla, which will serve feasts worthy of the gods, including BBQ pulled pork, an array of jacket potatoes and chipotle, and peri peri and maple & bourbon chicken wings. Guests can also enjoy ten brand-new Vikings-themed rooms at the theme park’s onsite 4-star hotel, featuring Nordic-inspired furnishings and traditional wooden paneling embellished with shields and paintings of Viking voyages. These themed rooms opened along with the expansion.

Drayton Manor Resort is home to a theme Park with over 100 rides and attractions, including plenty of family fun rides, Europe’s only Thomas Land, a 15-acre zoo, and a 4-star onsite hotel. All are situated on the grounds of the former Manor house based in Staffordshire, England.

At Drayton Manor’s theme Park, Guests can have a fun-filled day with family- favorite attractions such as The Bounty Pirate Ship, The Carousel, or Accelerator. Over at Adventure Cove, a nautical-themed land within the Park, they can experience a spin on Maelstrom and Air Race, feel the full throttle of Shockwave, the only stand-up roller coaster in the United Kingdom, or cool down on one of the Park’s incredible water rides – River Rapids and Stormforce 10. And at Thomas Land, Guests will be able to enjoy over 28 Thomas & Friends-themed rides and attractions.

Related: Child Hospitalized After Wolf Rips His Arm Off at Zoo

Drayton Manor also houses a 15-acre conservation zoo with dozens of animals from across the world that will surely captivate Guests with their astounding variety. The Park also provides a range of educational talks, workshops, events, and activity days for all student levels. Whether you want to learn more about dinosaurs, animal habits, the science around rollercoasters, or even how to run and market a business.

Have you ever visited Drayton Manor? Let us know in the comments below!