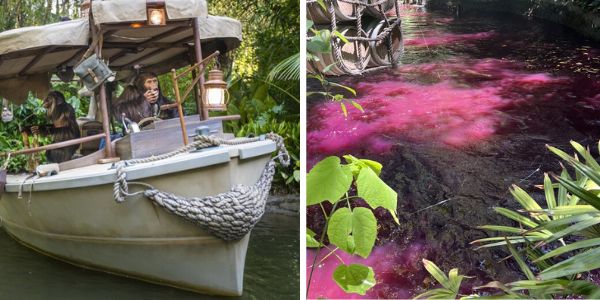 As many of you probably already know, Disneyland’s Jungle Cruise saw a major change recently, with all of the water in the attraction turning bright pink. This was an incredibly mysterious “phenomenon” that no one could explain, turning the iconic attraction into something out of Charlie and the Chocolate Factory. But now, Disney has revealed what exactly was going on.

According to Disney itself, in a story from The Orange County Register, the pink coloring was not a gender reveal party or the blood of a magical creature seeping through, but the pink color was the result of possibly the most exciting option: water treatment and testing.

This is far from the first major change the attraction has gone through. As many of you know, Jungle Cruise at Disney World and Disneyland recently underwent changes as part of the reimagining of the ride, making it more “inclusive” and less problematic.

The new version of the attraction is part of Disney’s efforts to tell diverse, inclusive stories across the theme parks. Last year, Disney Parks Blog shared that the company is “building on the story of the Jungle Cruise at both Disneyland park at Disneyland Resort and Magic Kingdom park at Walt Disney World Resort to include new adventures that stay true to the experience we know and love — more humor, wildlife and skipper heart — and also reflect and value the diversity of the world around us.”

Jungle Cruise is located both at Disneyland Park at Disneyland Resort in California and Magic Kingdom at Walt Disney World in Florida. The official description of the Disneyland version reads:

Did you see the pink water at Disneyland?