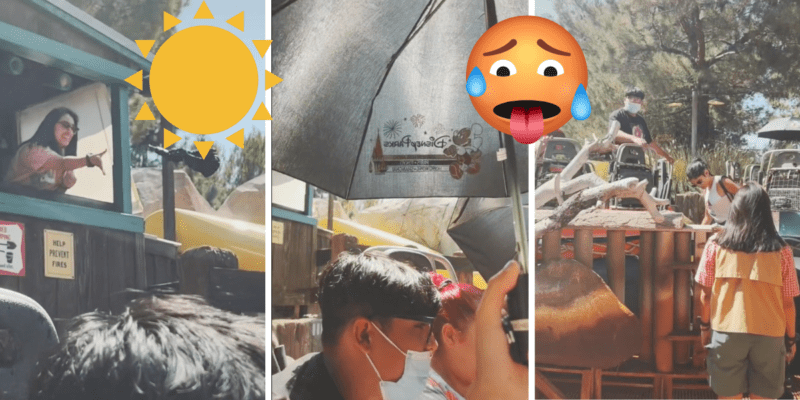 Like many other Disneyland Resort rides, Grizzly River Run at Disney California Adventure has recently experienced its fair share of maintenance issues. Despite a lengthy refurbishment, the water ride is still missing its most prominent Geyser feature.

This week, the ride experienced an unknown issue that forced Cast Members to evacuate Guests from the ride. Evacuating from a water ride like Grizzly River Run is complicated, so it took Cast Members a while to get each raft unloaded safely.

TikToker Skye (@xskylergiffordx) shared a video of his experience being evacuated from Grizzly River Run:

In the video, a Cast Member tosses waiting Guests some large black umbrellas to protect themselves from the hot. The temperature in Anaheim, California is averaging at a scorching 85 degrees Fahrenheit with no cloud coverage to dull the beating sun, so the Guests were very grateful for those umbrellas!

The Guests are safely escorted off the ride with a ladder and taken through backstage tunnels back into Disney California Adventure. Skye explains in a comment that he and his party were given free Lightning Lane passes to compensate for their experience, which they used to cool off on Splash Mountain at Disneyland Park.

Are you brave enough to journey into the mountains on a whitewater raft? You must be 42 inches tall to ride Grizzly River Run, and it’s recommended for kids, tweens, teens, and adults. From Disney:

Embark on a thrilling whitewater raft adventure that splashes you down a roaring California river deep in the mountains.

Have you ever been evacuated from a ride at Disneyland Park or Walt Disney World Resort?