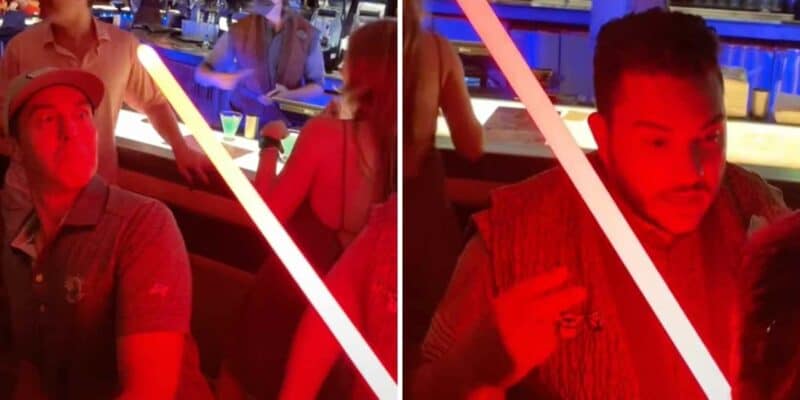 In a hilarious Cast Member exchange at Oga’s Cantina at the Walt Disney World Resort, a Guest was “threatened” with a weapon before having his alcohol taken away.

Oga’s specializes in fantastical drinks sourced with ingredients from across the galaxy and enticing concoctions that will delight even the youngest crew members.

To order selections with alcohol—like the Jedi Mind Trick cocktail, Bad Motivator IPA or Toniray wine—they will need to see your identification.

Video evidence of the exchange was uploaded to TikTok on July 17, 2022.

The absolute BEST experience at Oga’s Cantina! Ine from the Cantina – fantastic server – even if she threatened Dale. He deserved it.

The absolute BEST experience at Oga’s Cantina! Ine from the Cantina – fantastic server – even if she threatened Dale. He deserved it.

The clip shows a Cast Member wielding a brightly lit light saber when Guest “Dale” shouted “no weapons!” to the unsuspecting server. The server locks their sights on Dale and his giggling group in an effort to intimidate them until they’re spotted by another Cast Member with a better plan.

“ENOUGH ENOUGH ENOUGH. NO NO. No. No. We don’t threaten Guests like this!” the second Cast Member interrupted. “We threaten him like this, we take his alcohol!” They walked off with Dale’s beverage in hand in what the group described as “the best Oga’s experience.”

Exchanges like these are what make the various lands feel exceptionally interactive, especially at Star Wars Galaxy’s Edge where Guests are almost promised to be confronted by a Storm Trooper for their cell phone usage.

What is your funniest Cast Member exchange? Tell us about it below!