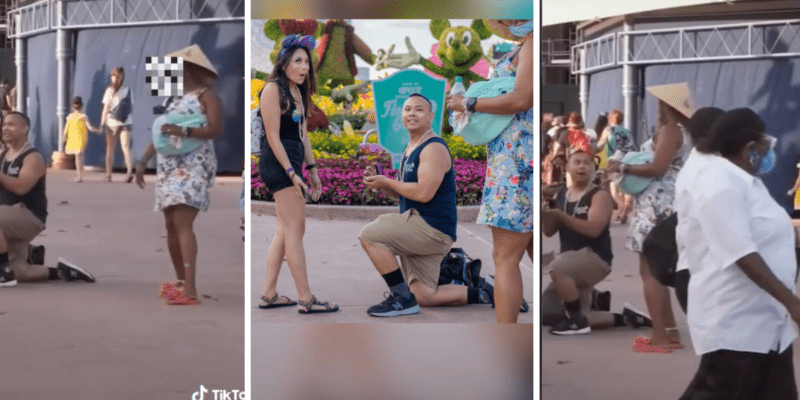 Another proposal was broken up at Disney, but this time it wasn’t by a Cast Member.

A video recently went viral of a Disney Cast Member who stepped in front of two Disney Park Guests just as a proposal had broken out at Disneyland Paris. The Disney Cast Member took the ring and escorted the two Guests from the area they were standing, though the Guests said they had gotten permission to be there.

Disney later issued an apology, saying they “regret how this was handled” and had “offered to make it right.”

Now, another video is going viral of Disney Park Guests attempting a wedding proposal that was broken up, but this time it was not by a Disney Cast Member. Instead, it was another Disney Guest.

The incident took place at EPCOT in Walt Disney World Resort. The couple was in the middle of a proposal when they were approached by another Guest. The Guest thought the couple didn’t have a photographer and was seemingly offering to get some photos, but the photographer was already there.

The couple explained, but it still didn’t stop the Guest from getting in several of the shots, including trying to get their own photo even after the incident unfolded. Still, it seems they had good intentions.

Proposals happen at Walt Disney World Resort and Disneyland Resort quite a bit. Whether it be at Magic Kingdom, EPCOT, Disney’s Hollywood Studios, or Disney’s Animal Kingdom, these are places that make memories that last a lifetime and it’s easy to see why so many couples want to start their “happily ever after” at Disney World.

What do you think of this Disney proposal video? Let us know in the comments!