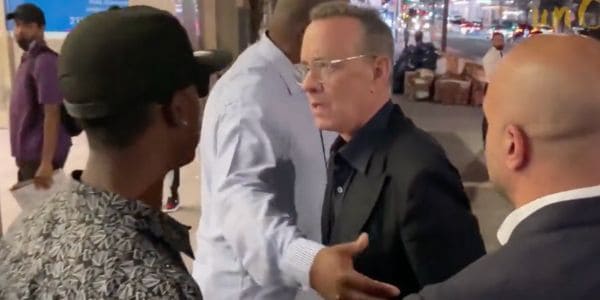 Tom Hanks is an icon in Hollywood and a Disney fan favorite. Starring in countless movies both comedic and dramatic, Tom Hanks has swept watchers away with his incredible performances and incredibly-distinct and recognizable voice.

From playing the iconic cowboy Woody in Disney’s incredibly popular Toy Story franchise to playing Walt Disney himself in Saving Mr. Banks (2013), Hanks has had a long and successful career with The Walt Disney Company.

More recently, Hanks has found himself landing a role in the upcoming Elvis (2022) film from Baz Luhrmann, starring alongside Austin Butler who plays “The King” himself. However, the actor’s most iconic role arguably goes to Forrest Gump, in the 1994 Paramount Pictures film of the same name.

The movie has become an intrinsic part of American popular culture — almost everyone has quoted, “Life is like a box of chocolates, you never know what you’re gonna get” at some point or another — and, now, Hanks is reuniting with the team that brought Gump to life.

Unfortunately, things went a little rocky for Tom Hanks and wife Rita Wilson, as they were exiting a building and were approached by fans. See the video shared on Twitter by @ScrubUnoriginal:

As you can see, Hanks yells and curses at a crowd of fans after they carelessly bumped into Rita Wilson, his wife, knocking her over. The situation only lasts around 30 seconds but shows how intensely and quickly Hanks tried to protect his wife.

The rest of Tom Hanks’ career includes hits like Big (1988), Philadelphia (1993), Forrest Gump (1994), Toy Story(1995), and its sequels, Steven Spielberg’s Saving Private Ryan (1998), Cast Away (2000), and more recently starring as Walt Disney himself, in Saving Mr. Banks (2013) opposite Emma Thompson’s Mary Poppins creator, PL Travers. At this point, Hanks is both a critical and commercial win for the box office and for filmmaking, no matter the movie or project.

Hanks also has served as a director and producer multiple times.