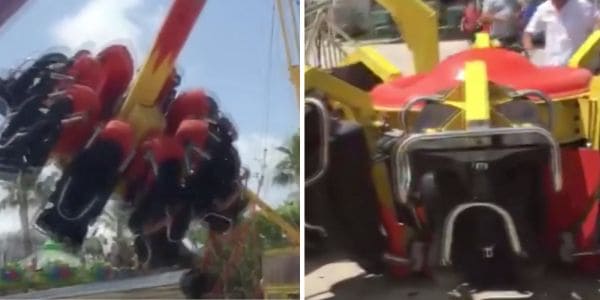 A terrifying accident occurred at an amusement park recently as reported by The Sun.

A shocking video recently surfaced online capturing the horrific moment a theme park ride snapped in half, hitting the ground hard while Guests were still on board.

The footage was captured at Ataturk Park, which is located in southwestern Turkey, on Saturday. The video shows the children smiling and laughing mere seconds before this disaster struck.

Related: Guests Harassed When Leaving Disney, Told to Give up Park Tickets

The ride was a pendulum-style attraction, a common ride at an amusement park. IN the video, the ride is swinging when the section the Guests are riding in detaches from the top of the attraction, resulting in a swift and scary landing.

According to the report, firefighters rushed to the scene and had no choice but to cut the injured and alarmed children out of their seats as the restraints were still locked. Screams could be heard as well as the incredibly loud “thud” of the ride vehicle slamming onto the ground.

A total of three kids were injured in the accident. All were taken to hospital with injuries. “I hit my head and I also have bruising on my foot,” said one of the kids.

As of the publication of this article, it is still unclear what caused this frightening malfunction but authorities are working to completely remove the dangerous attraction. Thankfully, no one was reported to be seriously hurt after this incident.

Local authorities are investigating the incident. For official images of the incident as well as the shocking video, click here.

We saw a similar incident occur at another theme park recently, with an attraction also breaking in half and dropping.

Have you visited this theme park?