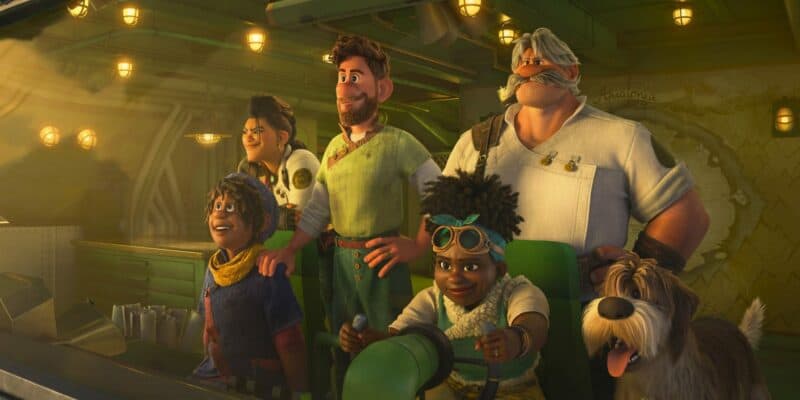 They also (not-so) subtly dropped the news that the film would feature the first openly gay romance in a Disney movie, during one of the sneak peeks shown.

Strange World is helmed by director Don Hall, who also co-directed some major Disney movies such as Winnie the Pooh (2011), Big Hero 6 (2014), Moana (2016), and Raya and the Last Dragon (2021), the new animated film promises to be an action-packed, adventure-filled romp through a magical world, featuring a family of explorers spanning three generations, known as the legendary Clades. This colorful cast of characters will navigate their relationships and differences, trying to pull off their most recent and crucial mission yet, while also navigating a strange new world.

The teaser trailer for the new adventure film has already been released.

The characters include adventure-seeking Jaeger Clade (Dennis Quaid), Meridian Clade (Gabrielle Union), who is the wife of his son, Searcher Clade (Jake Gyllenhaal), while Callisto Mal (Lucy Liu) is head of Avalonea, the magical world in which the film is set. Ethan Clade, voiced by Jaboukie Young-White, is the 16-year-old grandson of Jaeger — the character who will have a gay teen romance.

Openly gay himself, 27-year-old stand-up comedian Jaboukie Young-White has also dabbled in acting and writing for TV. Known for being a correspondent on The Daily Show with Trevor Noah, as well as writing on and lending his voice to the show Big Mouth, he has contributed his voice to other Disney films, such as the character McNeely in Ralph Breaks the Internet (2018).

Saghezchi continues, detailing what he saw:

The scene describes the son being very shy in front of his boy crush, and his dad comes in and says “so nice to meet you! my son talks about you all the time” and further embarrasses his son 🙈😂 very cute.

The scene describes the son being very shy in front of his boy crush, and his dad comes in and says “so nice to meet you! my son talks about you all the time” and further embarrasses his son 🙈😂 very cute.

However, as the character Daizo was not announced as part of the key voice cast, it’s safe to assume that their romance might take a bit of a backseat to the fantastical happenings, adventure, and family drama taking center stage.

Nevertheless, this is an extremely bold move from Disney, considering their past.

Previously, they had come under fire for cutting LGBTQ+ scenes out of the Pixar film Turning Red (2022) after backing the “Don’t Say Gay Bill”, as well as faced scrutiny for their Pride collection being “patronizing” to the LGBTQ+ community.

As of late, The Walt Disney Company has begun sticking more strongly to their claims of diversity and inclusion inside their films — refusing to cut out openly homosexual relationships or characters in Doctor Strange in the Multiverse of Madness (2022), resulting in some countries banning the film, as America Chavez, played by Xochitl Gomez, has two moms. Even more recently, the Toy Story-spin-off Pixar film Lightyear (2022) has made headlines — for also being banned in several countries due to a same-sex scene.

This announcement comes at an opportune moment for the Disney company as it is currently Pride Month.

Fans definitely seem excited about it, with Twitter user @disneybmermaid sharing on the #Pride hashtag:

Confirmed through the Disney panel at the Annecy Festival

Disney casts @jaboukie as the first ever openly gay character from @disneyanimation ! 😍🏳️‍🌈

Confirmed through the Disney panel at the Annecy Festival ✨

I’m definitely eager to see where Disney Animation Studios takes this fun-looking film and character, based on the quirky trailer!

What do you think of this new announcement? Are you excited about the movie? Comment down below with your thoughts!