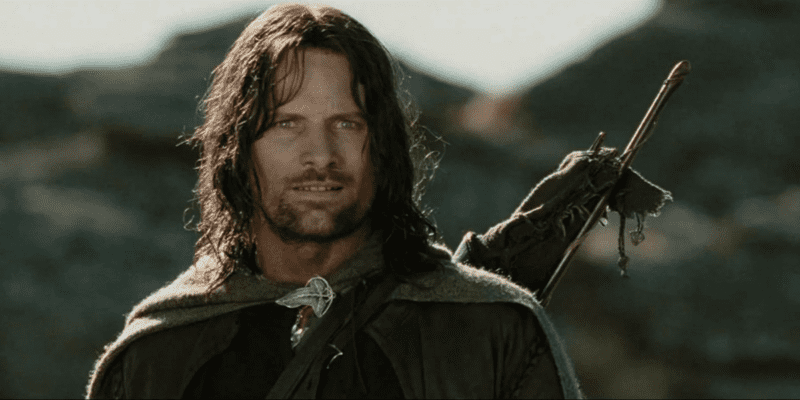 J.R.R. Tolkien’s Middle Earth contains countless heroes and villains, many of which fans don’t even realize exist. From the revolutionary Rings trilogy by Peter Jackson to Tolkien’s classic novels, every Middle Earth fan wants to know the most about each character.

Aragorn is one of the most famous and beloved figures of The Lord of the Rings. As one of the most studied characters in fantasy history, it’s time to understand exactly who this ranger is.

Aragorn goes by numerous names and titles throughout The Lord of the Rings. Known initially as Strider to Merry Brandybuck, Pippen Took, Samwise Gamgee, and Frodo Baggins, the Ranger of the North is later revealed to be Aragorn II Elessar, heir of Isildur — the first Ring-bearer — and heir to the throne of Gondor.

Lord of the Rings wiki writes:

Aragorn II, son of Arathorn II and Gilraen, also known as Elessar and Strider, was the 16th and last Chieftain of the Dúnedain of the North; later crowned King Elessar Telcontar (March 1, 2931 – FO 120), the 26th King of Arnor, 35th King of Gondor and first High King of Gondor and Arnor since the short reign of Isildur. He was a great Ranger and warrior, and as Isildur’s heir he bore the shards of Narsil, reforged and renamed Andúril, Flame of the West, in the War of the Ring.

Aragorn was a descendant of Elros Tar-Minyatur through the line of the Lords of Andúnië to Elendil, High King of Arnor and Gondor. His ancestor Arvedui was wedded to Fíriel, descended from Anárion, who bore their son Aranarth, making Aragorn the last descendant of both Isildur and Anárion.

When he was only two years old, his father Arathorn was killed while pursuing Orcs. Aragorn was afterwards fostered in Rivendell by Elrond. At the request of his mother, his lineage was kept secret, as she feared he would be killed like his father and grandfather if his true identity as the descendant of Elendil and Heir of Isildur became known. Aragorn was renamed “Estel” and was not told about his heritage until 2951.

Elrond revealed to “Estel” his true name and ancestry when he was twenty, and gave to him the Ring of Barahir and the Shards of Narsil. Elrond withheld the Sceptre of Annúminas from Aragorn until he “came of the right” to possess the item. It was also around this time that Aragorn met and fell in love with Arwen, Elrond’s daughter, newly returned from her mother’s homeland of Lothlórien where she had been visiting her grandmother Galadriel.

By the finale of Return of the King, Aragorn transforms into King Elessar Telcontar, the 36th king of Gondor and the first high King of Gondor since the fall of his ancestor Isildur to the One Ring.

Never corrupted by the evil of dark lord Sauron or Mount Doom, Aragorn proves his loyalty to Frodo and the Ring’s destruction by letting the small hobbit run free on the banks of the Anduin River.

His loyalty would prove true and later lead to the integrity it took to take the crown of Gondor once and for all.

Without Aragorn, there would be no Lord of the Rings. Nonetheless, before his War of the Ring began, Aragorn traversed the near entirety of Middle Earth as a Ranger:

Before the events of The Lord of the Rings properly take place, Aragorn traveled widely through Middle-earth, entering the Dwarven mines of Moria via the East-gate of Moria but exiting the same way. He also journeyed to Harad, where (in his own words) “the stars are strange”. Tolkien does not specify when these travels occurred nor does he indicate what happened during Aragorn’s visits.

In TA 3009, Gandalf grew suspicious of the origin of the Ring belonging to the Hobbit Bilbo Baggins, which later turned out to be the One Ring, the key to the Dark Lord Sauron’s power. Setting a guard of Rangers on the Shire, Aragorn went at Gandalf’s request into Rhovanion in search of Gollum, who had once possessed the Ring. He caught the creature in the Dead Marshes near Mordor, and brought him as a captive to Thranduil’s Halls in Mirkwood, where Gandalf questioned him. Gollum, however, escaped some time later with the aid of Sauron’s Orcs.

At the age of 87, Aragorn would embark on the journey with the Fellowship of the Ring that would shift Middle Earth into its Fourth Age:

Aragorn returned with Gandalf in the spring of TA 3018, and then went away on his own journey, and was not able to help when Gandalf discovered the Nazgûl were seeking for Frodo and the Ring in the Shire. After Frodo left Hobbiton, Gildor Inglorion informed Aragorn that the Nine were looking for him and Gandalf was missing. Aragorn continued to watch the Great East Road until Tom Bombadil and the four hobbits came from the Barrow-downs. Following them to Bree, he met Frodo at Inn of the Prancing Pony under the name “Strider,” as the Men of Bree called him. Though originally the hobbits were suspicious of him, Barliman Butterbur brought a letter from Gandalf that made them trust him. Aragorn was aged 87 at that time, nearing the prime of life for one of royal Númenórean descent.

After the raid on Bree, Aragorn led the Hobbits out of Bree-land and through the Midgewater Marshes. While there, he saw Gandalf’s battle with the Nazgûl on Weathertop from a distance. When they themselves came to Weathertop, they discovered five of the Nazgûl had followed them, and during the later attack he fought off the Ringwraiths. After attempting to heal Frodo with athelas, he led them across the Lone-lands towards the Trollshaws. They met with the Elf-lord Glorfindel who led them to the Ford of Bruinen. When the Nazgûl caught up with them and Elrond released a flood, Aragorn and the Hobbits kindled fire and flushed out those Nazgûl that had remained on the western bank. He then accompanied Frodo to Rivendell.

During the feast of victory, Aragorn was gathering news from Elladan and Elrohir, and later helped his friend Bilbo compose his Lay of Eärendil. During the Council of Elrond, he revealed himself to Boromir as the heir of Isildur and described his capture of Gollum. After Elrond decided that the Ring must be destroyed in Mordor, Frodo took the burden upon himself. There, Aragorn chose to join Frodo, thus forming the Fellowship of the Ring, tasked with accompanying Frodo in destroying the Ring in the fires of Mount Doom in Mordor. Besides Aragorn, Gandalf, and Frodo, the company included Frodo’s cousins Pippin and Merry, his best friend Samwise Gamgee, Legolas the Elf, Gimli the Dwarf, and Boromir of Gondor.

Due to the royal blood that flowed through Aragorn and other descendants of the Numenorean (the “Rangers”), the Dunedain were able to live the lives of three men, explaining why Aragorn, at the age of 87, was still considered “young.”

As explained in the extended edition of The Lord of the Rings: The Two Towers (2002), Aragorn was present alongside King Théoden of Rohan when the horse rider was just a child. Nonetheless, Aragorn is technically younger than Théoden at the King’s death.

Nonetheless, Aragorn lived to be 210 years old, lasting 122 years after taking the crown of Gondor. Aragorn was buried alongside Merry and Pippen (who died 58 years before in Gondor) and was succeeded by his son, Eldarion.

As Captain of the West, Healer of Gondor, and Commander of the Dead Army, Aragorn proved himself as one of the strongest, most noble, and integral beings of all Middle Earth.

Able to withstand the temptations of Sauron and prove himself as the true heir of Gondor, King Elessar cemented himself as one of, if not the most significant rules within Tolkien’s fantasy.

Having appeared in the Lord of the Rings (1978) and The Return of the King (1980) animated movies, Aragorn’s most faithful and impressive adaptation lies within Viggo Mortensen’s gripping performance as the Ranger of the North in Peter Jackson’s Lord of the Rings trilogy.