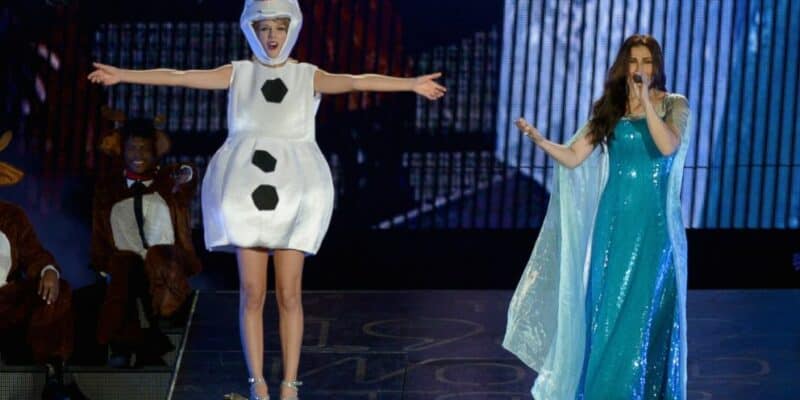 You might not have known that Taylor Swift– and her bodyguard– are huge Disney fans.

Taylor Swift is renowned around the world for her chart-topping hits and beloved albums.

The popular singer and songwriter has notched an impressive eight No. 1s on the Billboard Top 100 with countless hits inside the Top 100 and has won the Grammy for Best Album three times for Fearless, 1989, and Folklore.

From early hits like “Love Story,” “Fearless,” “Enchanted,” and “You Belong With Me” to “Welcome To New York,” “Look What You Made Me Do,” and many newer songs like “Cardigan,” “Betty,” and every in between from the Speak Now, Red, 1989, reputation, and evermore albums, as well as her recent “Taylors Version” albums that have been released, Swift has amassed a legion of loyal fans, noted as ‘Swifties.’

During her 1989 Tour back in 2015, Taylor Swift performed with the voice of Elsa from Frozen, Idina Menzel. Swift emerged on stage dressed as Olaf and sang the popular Disney hit “Let It Go” with Menzel. However, it’s not just Disney songs that Taylor Swift enjoys.

User @_disney._stuff_ has compiled a video of several different times that Taylor Swift took on Disney attractions. You can check it out on TikTok.

As you can see in a couple of the clips, even Swift’s bodyguard hilariously rode many attractions, ensuring that she was safe throughout her entire experience. The video was made last week and now has nearly 12,000 likes, but the compilations taken are from older dates and are not recent. Still, the reactions are hilarious.

Have you ever spotted a celebrity at Disneyland or Disney World? Let us know in the comments!