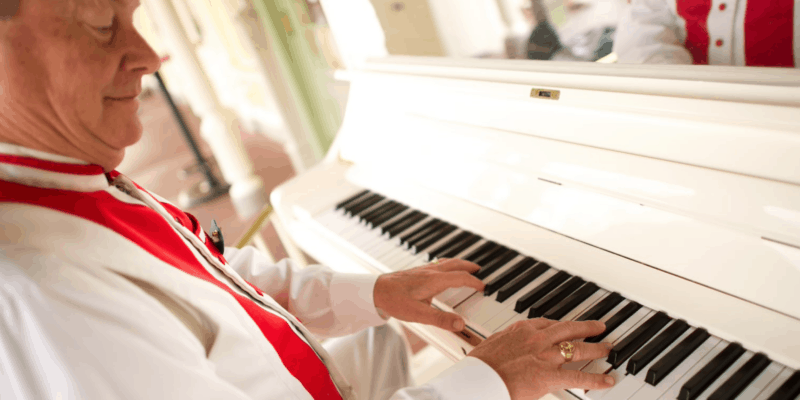 If you’ve ever visited Walt Disney World Resort, you know that one of the biggest treats on Magic Kingdom Park’s Main Street, U.S.A. are the Casey’s Corner pianists.

This rotating group of musicians is immensely talented — they delight Guests with amazing renditions of classic ragtime tunes all day long.

The original video is captioned, “This Cast Member is a PRODIGY!”

Commenters began praising the pianist for his incredible skills, writing things like, “Pretty sure I saw smoke coming out of that thing. Someone’s got some fiery hands!!!”

One Disney Parks fan even shared a fun story about a conversation with Disney World’s piano tuner:

I live in Orlando and got my piano tuned. The guy that did it is the same guy that tunes the half dozen pianos in Disney. He says they play so hard and so much that he has to tune them nearly monthly.

To put it in perspective, Yamaha’s “Care and Maintenance of a Piano” webpage notes that pianos should normally be tuned “once a year to keep them up to pitch and playing the correct notes.”

This means that Disney’s pianists are playing so hard their pianos have to be tuned 11x more than the typical instrument!

Featuring swell ragtime tunes from a bygone era, these syncopated stylings will have you tapping your toes. When folks start to gather around, don’t be surprised if they start to croon along. Between ditties, this proficient pianist may entertain you with one-liners and zingers.

This ivory tickler is a real hoot!

Do you enjoy stopping to enjoy a musical interlude at Magic Kingdom?