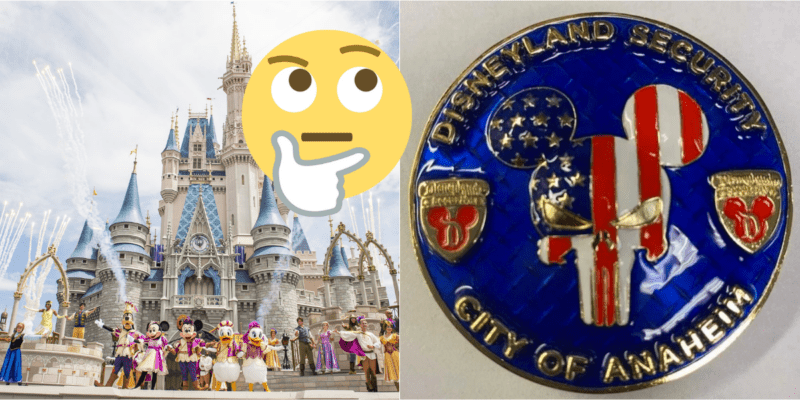 Security Cast Members at the Disney Parks have a lot of responsibilities: they check bags and operate metal detectors at Park Entrances, patrol the Disney Resort hotels, and help de-escalate situations with unruly Guests.

But did you know they have a secret?

Recent social media posts have brought light to a years-long tradition among Disney Parks security Cast Members- creating and trading Challenge Coins. Twitter user @DisneyDragon shared a photo of four coins that have popped up on eBay over the years:

Reminder that Disney security have these weird ass challenge coins circulating in the department pic.twitter.com/2eLWJQF7pS

Some of the coins even use The Walt Disney Company’s intellectual property, shown in another photo from @DisneyDragon:

Disney absolutely cracks down on every other use of any amount of their IP, but this is apparently Fine

Disney absolutely cracks down on every other use of any amount of their IP, but this is apparently Fine pic.twitter.com/43tXCMkYE4

One lucky Walt Disney World Guest was given one by a security Cast Member at Magic Kingdom:

Was given this challenge coin by a cast member today. First time at the Magic Kingdom…does this happen often?

Was given this challenge coin by a cast member today. First time at the Magic Kingdom…does this happen often? from WaltDisneyWorld

Many Disney fans told the Guest how lucky they were and to cherish the coin, as Guests don’t receive them often. A former Disney Cast member shared that they had only seen a security Cast Member give one to a coworker when they “helped a guest with a horrible injury.”

The coins are reportedly inspired by military and law enforcement tradition, according to Reddit user u/transitapparel:

It’s a military tradition that bleed into law enforcement. Officers and specialists can carry them and it used to be a bit of a game at bars and drinking establishments. You’d “challenge” someone to show their highest ranking coin and if yours was higher, you kept theirs. You’re not restricted to your own rank coin either (if I’m an Army captain, I can carry a SecDef coin and still use it).

It’s become more mainstream and less connected to drinking, fun to see other interpretations of it in other professions now.

A former security Cast Member said that Disney’s security team has a Facebook page where they share ideas for new coins and place orders.

According to Reddit user u/chilledquesadilla, the Orlando division of the FBI has their own Challenge Coin decorated with Mickey Mouse ears. They wrote:

Fun fact, in government, military, law enforcement, these are called “challenge coins” and each are unique to the agency. Ex: FBI Orlando has Mickey Ears. They are often exchanged as a token of appreciation or greeting when meeting for the first time. As someone who’s received many coins in their career, treasure this one. I. Am. Jealous.

Have you ever seen an elusive Disney Security Cast Member Challenge Coin? Let us know in the comments.