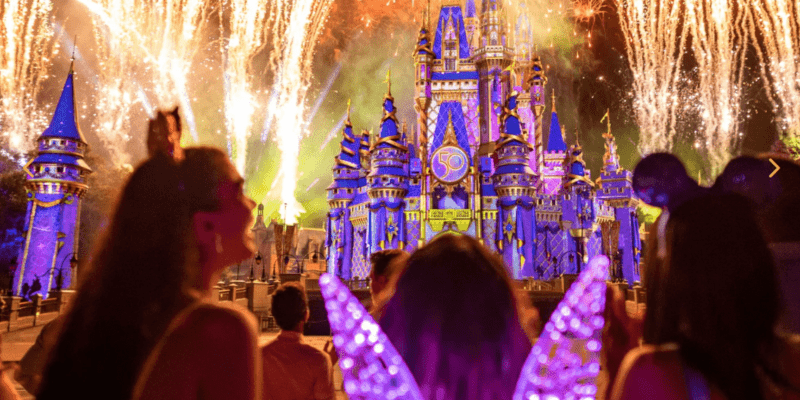 People gather on Main Street, U.S.A. hours early in order to secure a good spot for the Magic Kingdom fireworks, Disney Enchantment. But one TikToker is sharing a tip on how you can grab a spot without having to wait hours — although the tip is considered to be controversial by many!

As the night goes on and as it gets closer to fireworks time, Disney Cast Members will begin telling Guests to fill in all the available space and to take a big step forward. So, if you are joining others on Main Street, U.S.A. when the Cast Members begin asking Guests to fill in the space, go ahead and do so.  Just remember to be respectful to others who have been waiting a bit longer.

The Mouselets shared this tip to TikTok, where other fans are commenting and sharing their opinion on the situation. The reason this tip can be considered controversial is because some may find it disrespectful to squeeze into any available space last minute while others have waited hours.

On the other hand, the Cast Members are asking Guests to fill in the available space.

Only use this tip if cast members are letting ppl into the area still! #disneyworld #disneysecrets #disneyhacks #disneyfireworks

The mad people are the ones who waited for an hour but like….. you didn’t need to do that !

And Kristy, another Disney fan, commented on the video:

Yeah, being as I’m usually by myself, I find a spot to squeeze into 15 minutes before it starts and still get an amazing view.

One TikToker user has used this tip, writing:

Agree. Done it many times

If you have never seen the new fireworks show, Disney Enchantment, the official Walt Disney World website describes the nighttime show as:

Related: Watch Disney Fireworks With NO Crowds At This Secret Viewing Area

Did you know about this fireworks tip? Let us know in the comments below.