Universal’s Seuss Area Could Be Demolished - Inside the Magic 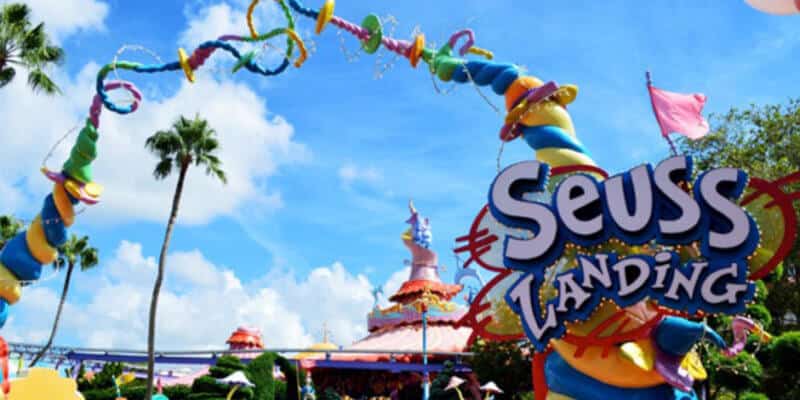 Universal Orlando Resort is known for its thrilling attractions like the Jurassic World Velocicoaster, Hagrid’s Magical Creatures Motorbike Adventure, and The Incredible Hulk Coaster, but there is plenty more to enjoy than just thrill rides.

One of the most beloved themed lands in the Universal Parks is located at Islands of Adventure in Seuss Landing.

Over the last several months, Seuss Landing has been undergoing several construction projects at once. Portions of the Seuss Landing archway collapsed and, now, only a portion of the archway remains. In addition, the Caro-Seuss-el is undergoing major refurbishments and the attraction has been closed for around a year with no timeline for when we might see it reopen. As a result of the construction happening on the Caro-Seuss-el, the High in the Sky Seuss Trolly Train has had to make modifications to its ride, which has caused wait times to increase heavily.

If all that weren’t enough, more construction walls have taken over the beloved land, this time at the If I Ran The Zoo playground area.

The If I Ran The Zoo playground has not been fully opened since the pandemic, but portions of the area were still able to be accessed by Guests. However, just recently, Universal erected construction walls that completely block off the area.

“If I Ran the Zoo” is one of six Dr. Seuss books that were removed from future publication and licensing in 2021 due to stereotypical portrayals that appear in the books. When the move was made to remove the books from future publication, Universal said in a statement that it would evaluating its in-park experiences for Seuss Landing.

The If I Ran The Zoo play area does not contain any of the offensive stereotypes, but rumors have been swirling for quite some time about a possible retheme, which could lead to a complete demolition of the area depending on how in-depth Universal Orlando would decide to go.

At this point, however, it’s unknown if the construction walls are being erected for simple refurbishments or a complete retheme. It should be noted that the large sign that reads “If I Ran The Zoo” is still standing and the play area is still listed on the Universal Orlando app.

What do you think of potential retheming for If I Ran The Zoo? Let us know in the comments.